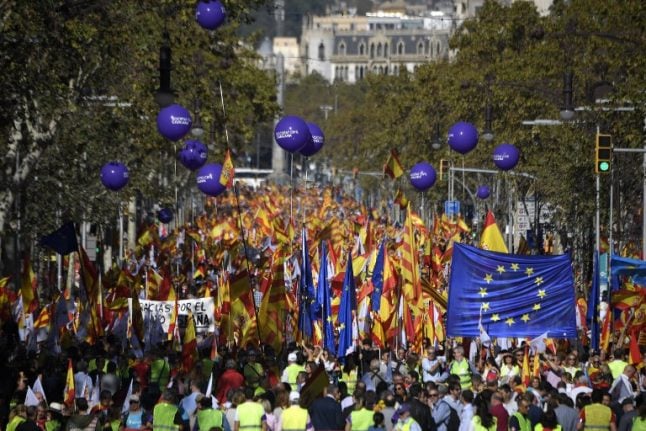 As protesters gathered for the march, the deputy president of the region's now-deposed government lashed out against Madrid over what he called a “coup d'etat”.

“The president of the country is and will remain Carles Puigdemont,” his deputy Oriol Junqueras wrote in Catalan newspaper El Punt Avui.

Junqueras used the word “country” to refer to Catalonia, whose lawmakers pushed Spain into uncharted waters Friday with a vote to declare the region independent.

“We cannot recognise the coup d'etat against Catalonia, nor any of the anti-democratic decisions that the PP (Prime Minister Mariano Rajoy's ruling Popular Party) is adopting by remote control from Madrid,” Junqueras wrote.

He signed the article as the “vice president of the government of Catalonia”.

The Catalan crisis was triggered by a banned independence referendum on October 1 that was shunned by many, and marred by police violence.

Then on Friday, Catalan lawmakers passed a motion, by 70 votes out of 135 in the secessionist-majority regional parliament, to declare the region of 7.5 million people independent from Spain.

Rajoy responded by deposing the regional government, dissolving its parliament, and calling December 21 elections to replace them.

As prosecutors prepared to file charges of rebellion against Puigdemont next week, he too was defiant on Saturday, calling for “democratic opposition” to Madrid's power grab.

Puigdemont accused the central government of trampling on the will of independence-seeking Catalans with the first curtailment of regional autonomy since Francisco Franco's brutal 1939-75 dictatorship.

Barcelona readied for Sunday's anti-independence march under the slogan: “Catalonia is all of us!”

Television footage showed people streaming out of a metro station near the march, draped in Spanish flags.

The rally is due to kick off at noon near where tens of thousands of people celebrated the new “republic” with song, wine and fireworks just two days earlier.

Participants at the rally will include representatives of three Catalan opposition parties — including Rajoy's conservative PP, in what may amount to the start of an election campaign.

Later on Sunday, Real Madrid football club will face Girona, Puigdemont's favourite team, in the Catalan side's home stadium, in a game that may see some of Spain's divisions reflected in the stands.

It is the first visit by Real Madrid, Rajoy's favourite team, to Catalonia since the referendum.

Roughly the size of Belgium, Catalonia accounts for about 16 percent of Spain's population and attracts more tourists than anywhere else in the country.

It produces about a fifth of Spain's economic output — equivalent to that of Portugal.

Before the upheaval, Catalonia enjoyed considerable autonomy, with control over education, healthcare and policing.

But while fiercely protective of their language, culture and autonomy, Catalans are divided on independence, according to polls.

Rajoy drew sweeping powers, approved by the senate, under a never-before-used constitutional article designed to rein in rebels among Spain's 17 semi-autonomous regions.

He used these to axe Puigdemont, his deputy, regional ministers, heads of departments, and the chief of police in a move that angered some Catalans.

Far-left supporters of Puigdemont have threatened “mass civil disobedience” if Rajoy carries out the power grab, but have yet to announce any plans.

In Madrid, several thousand people gathered on the central Plaza Colon Saturday, waving the Spanish flag, and calling for Puigdemont to be jailed.

Spain enjoys the backing of the United States and allies in a secession-wary European Union still reeling from Britain's decision to leave its fold.

Many fear the economic impact as the standoff drags on, with some 1,700 companies having moved their legal headquarters out of Catalonia so far.