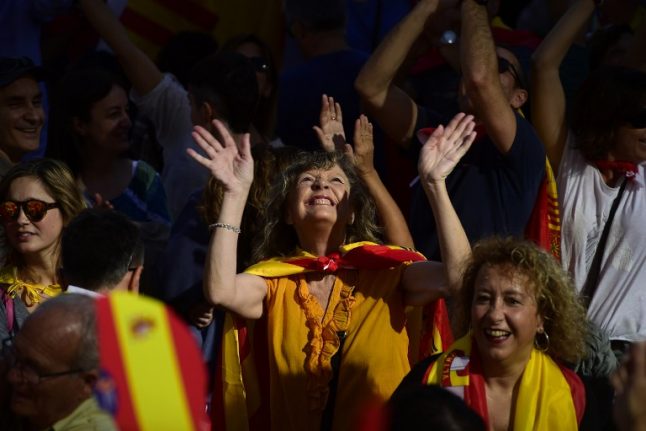 “In my town, I am unable to leave my house with the Spanish flag,” fumed 19-year-old student Marina Fernandez from Girona, a separatist stronghold, as a sea of protesters waved the red-and-yellow Spanish national flag.

“I am enraged about what they are doing to the country that my grandparents built.” An hour before the scheduled 12:00 pm (1100 GMT) start of the pro-unity demonstration in the centre of the city of Gaudi, thousands had already gathered, chanting “Prison for Puigdemont”, and “Long live Spain”.

The region's leader Carles Puigdemont and his government were deposed by the central government on Saturday, a day after Catalan lawmakers voted to declare the region of 7.5 million people an independent republic.

The central government later said that one million protesters were at the scene, with police suggesting the figure was closer to 300,000. Organizers estimated 1.3 million. Flor Pena, a 59-year-old originally from the northwestern autonomous region of Galicia, said: “I am here to help Spain. They (the separatists) are shameful. The thing to do now is to beat them at the polls… then everything will be fixed.” Miguel Angel Garcia Alcala, 70, travelled from the town of Rubi, 22 kilometres (14 miles) from Barcelona, for the march.

“I do not agree with these people holding us by the hair,” he told AFP. “It is illegal what they have done…. They are dictators.” A protester holds a sign reading “Being Catalan is a pride, being Spanish is an honour” For 35-year-old office worker Silvia Alarcon, the separatists “live in a parallel world, a little surreal. I am angry that they claim to speak for all Catalans when they do not.”

Ines Arramadas, leader of the Ciudadanos main opposition party in Catalonia, told journalists at the march that the majority of the region's inhabitants wished to “recover our future”.