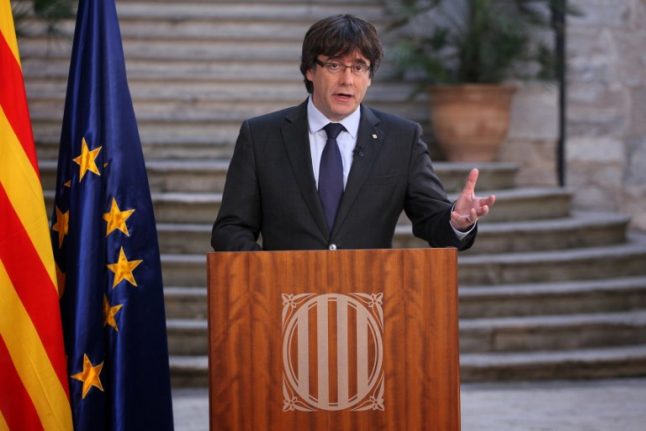 “The best way to defend what we have achieved to date is democratic opposition to the application of article 155,” Carles Puigdemont, who was officially deposed by Madrid on Friday, said in a carefully-worded televised statement that appeared to indicate he did not accept his dismissal.

Puigdemont was referring to the never-before-used constitutional article that gives Madrid the takeover powers, adding he and his team would keep working “to build a free country.”

In his first comments since being deposed as president of Catalonia, flanked by a Catalan and EU flag, he did not clarify whether he would carry on as leader of a new republic that is not recognised by Madrid or abroad.

In a copy of his speech sent to AFP, he signed off as “president of the Catalan government,” implying he considered himself to still officially be head of the semi-autonomous region.

He stopped short of signing off as president of the republic, though.

In a cryptic message, Puigdemont also asked Catalans to defend the republic proclaimed by the regional parliament.

“We need to keep defending the stage in which we have entered with a tireless sense of civic responsibility and peaceful commitment.”

He added that “in a democratic society, only parliaments can pick or dismiss presidents.”

The Catalan parliament, however, has been dissolved by Prime Minister Mariano Rajoy, who also called snap regional elections on December 21 in a bid to restore “normality.”

Spain's central government has also been granted sweeping powers by the Senate to dismiss Puigdemont and his executive, and take control of all regional ministries.