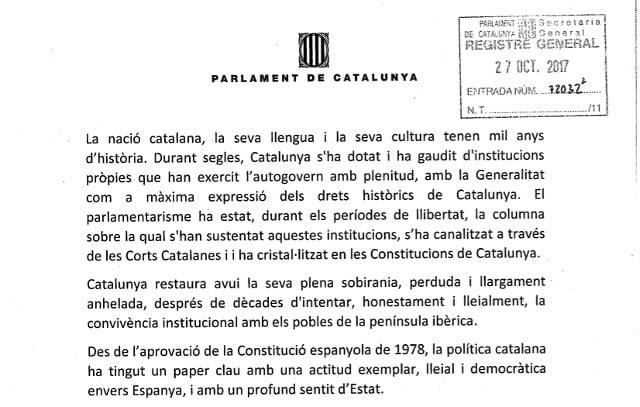 A screenshot of the resolution. Photo: Together For Yes/CUP

“Catalunya today restores its full sovereignty, lost and long desired, after decades of trying, honestly and with commitment, for institutional coexistence with the peoples of the Iberian Peninsula,” the preamble agreed by governing coalition Together for Yes and their allies CUP states.

“The constitution of the Catalan Republic is founded in the necessity to protect freedom, security and the coexistence of all citizens of Catalonia and in order to progress towards a rule of law and democracy of greater quality, and responds to the Spanish state impeding people from effectively exercising the right to self-determination.”

“We establish the Catalan republic as an independent and sovereign state with democratic and social rights,” a key line of the resolution reads.

Catalonia's parliament, where pro-independence parties hold a majority, is due to vote Friday on whether to lift the “suspension” on a declaration of independence made by president Carles Puigdemont on October 10th.

READ ALSO: Puigdemont says he has mandate for independence, but suspends declaration

Pro-independence supporters have started to gather outside the parliament building in Barcelona in expectation of the session, which has been delayed from an original time of 12pm. At the same time, Spain's Senate is preparing to vote on article 155 measures to intervene in Catalonia's autonomy and remove its government, following a speech by PM Mariano Rajoy in which he asked for support to respond to “a continuous process of anti-democratic decisions” in the region.