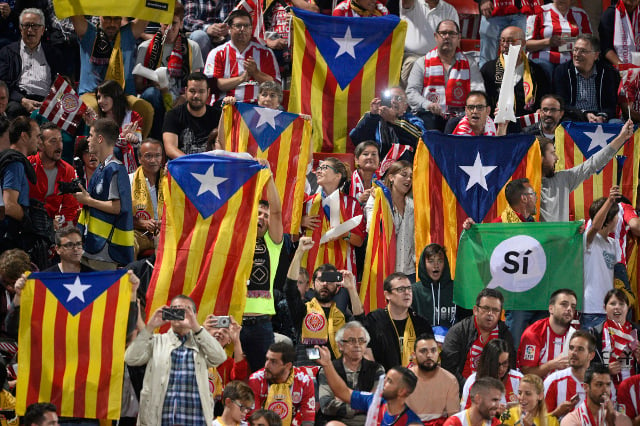 It is the European champions' first trip to Catalonia since violence marred a separatist-called independence referendum for the region on October 1 that has sparked weeks of political chaos.

The atmosphere surrounding Real's first ever top-flight visit to Girona, a heartland of pro-independence support, could be further intensified should the Spanish government follow through with plans this weekend to seize Catalonia's autonomous powers in an attempt to stave off a declaration of independence.

But the protagonists insist they are preparing solely with the 90 minutes on the pitch in mind.

“We will have the security there as always to play a football match, nothing more,” said Madrid coach Zinedine Zidane.

“We are thinking solely about the match as always and not about what could happen around it.”

As is normal on trips to Catalonia, Real will not use their official team bus for fear of reprisals.

“It won't be the first time that this has happened and there is no need to give it any further importance,” Real's Director of Institutional Relations, Emilio Butragueño, told Spanish sports daily Marca.

“Real Madrid are a football club and we will only talk about the football – that is all we focus on, to win and to make our fans happy.”

Fresh from picking up FIFA's award for the best player of 2017, Cristiano Ronaldo will be one of number of Real stars to return after being rested for Real's Copa del Rey last 32, first leg at third-tier Fuenlabrada on Thursday.

Gareth Bale once again misses out through injury, although there is hope the Welshman could return from a calf problem in time to face his old side Tottenham Hotspur in the Champions League on Wednesday.