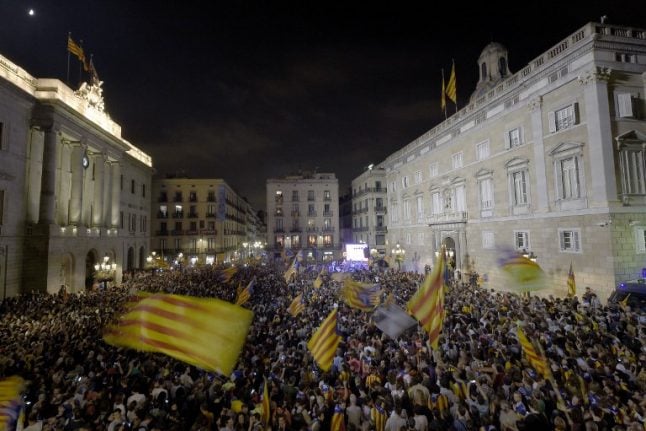 Crowds gather in Barcelona to celebrate the proclamation of a Catalan republic. Photo: AFP

As thousands of pro-independence activists cheered outside, the regional parliament in Barcelona passed a resolution declaring Catalonia “a republic in the form of an independent and sovereign state”.

Demonstrators broke out in ecstatic shouts of: “Independence!” as the vote count was announced, while MPs cheered, clapped and embraced before breaking out in the Catalan anthem.

Urging Spaniards to “remain calm” as the country heads into the unknown, Prime Minister Mariano Rajoy insisted “the rule of law will restore legality in Catalonia”.

Rajoy held a crisis meeting of his cabinet after the Senate gave his government powers to impose direct rule on the wealthy, semi-autonomous region.

Madrid's allies in the European Union and the United States rallied behind him, voicing alarm over the latest developments in the long-running standoff, and voicing their support for a united Spain.

The Catalan resolution, which analysts say the region has no legal power to execute, was passed by 70 votes to 10.

There were two abstentions, but dozens of opposition MPs had walked out before the secret ballot in the 135-seat assembly, where 68 votes constitute a majority.

One lamented “a dark day” for democracy, and shares in Spanish companies, particularly Catalan banks, dropped sharply after the vote.

Catalonia, a region of about 7.5 million people, accounts for about 16 percent of Spain's population, a fifth of its economic output and attracts more foreign tourists than anywhere else in the country.

The measures approved by the Senate under Article 155 of the constitution —  designed to rein in rebels among Spain's 17 regions — could see Catalan leader Carles Puigdemont, his deputy and regional ministers out of a job by Saturday.

Spain's prosecuting authority also announced it would file charges of “rebellion” — punishable by up to 30 years in jail — against Puigdemont next week.

Madrid could also seize control of Catalonia's civil service, police and finances — measures that would remain in place until a new parliament is elected. But senators opted not to interfere with Catalonia's public radio and television.

Popping bottles of cava, Catalan sparkling wine, pro-secessionists waved the red-and-yellow Catalan flag and cheered as the vote count came up on big screens outside the regional parliament building, then sang the region's anthem with raised fists.

In a bar in Madrid, however, lunch-goers were not happy, with several shouting “to jail with them all!” at the TV screen.

EU President Donald Tusk insisted Madrid “remains our only interlocutor” in Spain after the independence vote that could test the stability of a key member of the bloc.

Wary of nationalist and secessionist sentiment, particularly after Britain's dramatic decision last year to leave the EU, the bloc has stood firmly behind Madrid in the escalating standoff.

“I hope the Spanish government favours force of argument, not argument of force,” he tweeted.

“We will have to maintain the momentum of this country (Catalonia) in the coming hours,” he told lawmakers and onlookers in Barcelona, while urging them to do so in the spirit of “peace, civic responsibility and dignity”.

The United States, one of Spain's Nato allies, declared its backing for Madrid using “constitutional measures to keep Spain strong and united”.

Germany, France, and Britain, too, rejected the notion of Catalan independence.

There are deep concerns over the economic impact of the showdown, with nearly 1,700 companies having recently moved their legal headquarters out of Catalonia, a region with an economic output equivalent to that of Portugal.

Catalan resentment at Madrid's perceived interference has been building for years, culminating in an October 1st independence vote deemed illegal by the central government and the courts.

The 2008 economic crisis has compounded the bitterness, with Catalans feeling they contribute more to the central purse than they get back.

But while fiercely protective of their language, culture and autonomy — restored at the end of the 1939-1975 dictatorship of Francisco Franco — Catalans are deeply divided on independence.

Catalan authorities said 90 percent voted “Yes” in the unregulated plebiscite now held up by secessionist leaders as a mandate for independence.

Only about 43 percent of voters turned out, however, with many anti-secessionists staying away and others prevented from casting their ballot by Spanish police in a crackdown that turned violent.

By AFP's Daniel Bosque with Daniel Silva in Madrid