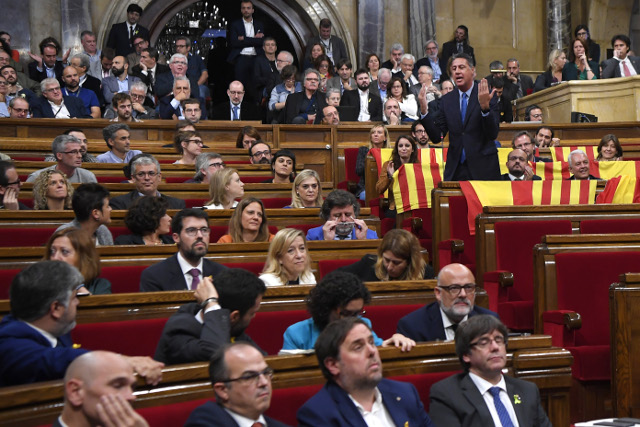 An image from the debate ahead of the vote in the Catalan regional parliament. Photo: Lluis Gene/AFP

Following a request from one of the pro-independence MPs, parliament speaker Carme Forcadell read part of the preamble from the motion, in which a declaration of independence is made.

READ ALSO: 'We establish the Catalan republic as an independent state'

The vote then took place, resulting in 70 votes in favour of approving the text, ten against and two blank votes.

Opposition politicians from Citizens and the PP left the chamber before the vote in protest, and did not take part.

Separatists who had gathered on the streets of Barcelona and near the parliament building celebrated as the news of the vote came in. Attention now turns to Madrid, where the Senate is due to vote on measures to intervene in the region’s autonomy and remove the Catalan government from power. PM Mariano Rajoy made an appeal for the measures to pass earlier on Friday, insisting it was a response to “a continuous process of anti-democratic decisions” in Catalonia.

Ahead of the vote, Marta Rovira from the governing pro-independence Together for Yes coalition argued “we need a more mature and demanding culture of democracy. The debate about the constitutional process has to be constant”.

“Today we will found a new country based on these principles, and dignity. We're doing it.”

Inés Arrimadas of Citizens called the vote “an attack on the fundamental values of the European Union,” adding “that's why you have no support”.

“Are you not ashamed to lead a political movement that excludes those who think differently?” PP MP Alejandro Fernández asked.

“It is a problem because it doesn't provide solutions for the current issue. We propose a new framework of a republic that offers democratic solutions”.

PM Rajoy reacted almost instantly to the vote on Twitter, asking Spaniards to be “calm” and insisting that “legality will be restored in Catalunya”. READ ALSO: International and constitutional law experts on what a declaration of independence means