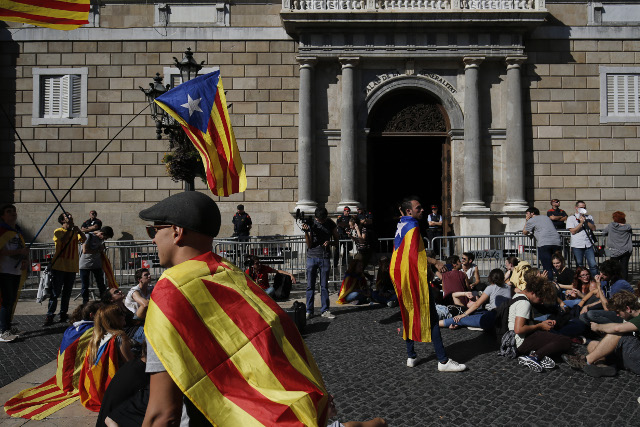 Unless Catalonia abandons all secessionist moves, the Spanish senate is set  to launch measures on Friday to depose the regional government and take over its institutions, police and public broadcaster by Saturday.

Catalan leader Carles Puigdemont on Friday suspended a planned announcement ahead of the deadline.

“It is possible that there will be resistance,” Economy Minister Luis de Guindos told radio Cadena Ser when asked how he sees Catalonia's 176,000 public workers reacting to a takeover.

“But we hope that the public workers… will be aware that any action against Catalan society will be negative,” he added.

“The law must be respected, because ultimately, it is Catalan society that will suffer the consequences.”

Once imposed, the measures are intended to stay in place for up to six months, until regional elections are called and a new Catalan parliament sworn in.

“We recommend that they ask for instructions in writing if they feel the orders are strange,” CCOO secretary general Unai Sordo, told Cadena Ser.

Spain's conservative central government plans to trigger the never-before-used Article 155 of the constitution, designed to rein in rebel regions, to temporarily remove some of Catalonia's powers and stop its independence push.

The measures would come into effect once published in the government gazette on Saturday, effectively leaving Puigdemont and his executive without jobs.

“We are going to carry out a strictly administrative management, during the time it takes to regain normality,” the economy minister said.

The effects on the economy of the political uncertainty generated by the Catalan crisis will be felt in the region in the coming months, he added.

“There is a drop in consumption and a paralysis in investments, which is logical in a situation of enormous uncertainty and worry,” the minister said.