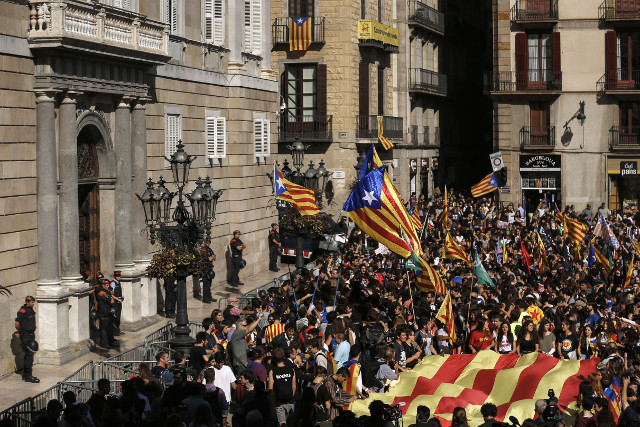 “I considered the possibility of calling elections,” Puigdemont admitted to the media. “My responsibility is to use all of the avenues possible to find a solution using dialogue in a political conflict,” he explained, “but there are no guarantees (from the Spanish government) to justify that”.

It was at 17.00 Puigdemont finally spoke from the Palau de la Generalitat government building in the Catalan capital after previously delaying then suspending a media conference originally called for lunchtime. Earlier in the day strong rumours circulated suggesting he would announce early elections in an effort to halt Spain’s intervention into Catalan autonomy.

That provoked protests in Barcelona and  several pro-independence MPs to announce they would resign if a vote happened, while one of the Together for Yes coalition's member parties, the Republican Left of Catalonia (ERC), threatened to leave the government if elections were called.

That combined with Spain's ruling PP making clear that it is unwilling to pull back on article 155 measures to stop the secessionists even in the event of an election meant that by Thursday afternoon Puigdemont was left with little motivation to call a snap vote.

“I've tried to get guarantees, but yet again I have not received a responsible answer from the PP. Nobody can say that I have not been ready to make sacrifices. It is up to the parliament to go ahead with what the majority decides,” Puigdemont concluded.

The Catalan parliament will hold a session at 18.00 on Thursday in which it will debate its next move less than 24 hours before Spain's Senate votes on intervening in Catalan autonomy. On October 1st a referendum on independence was held in the region despite the vote being deemed unconstitutional by Spanish courts.

READ ALSO: Where the Catalan parliament could go next