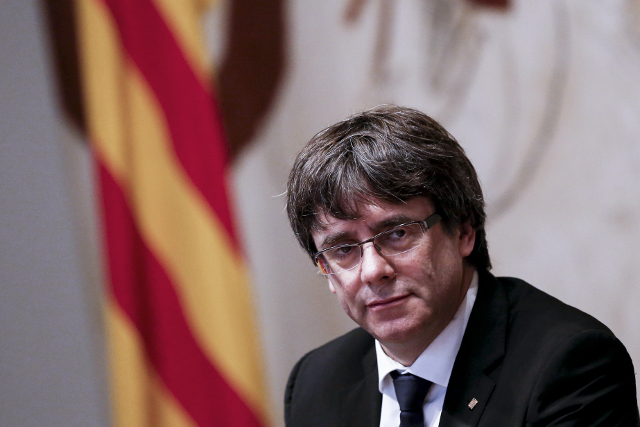 On a day that could make or break already tenuous relations between Spain and its wayward northeastern region, the 135-member Catalan parliament, in which separatists hold a majority, is set to meet from 5:00 pm (1500 GMT) to formulate a plan.

At the same time, a senate committee will gather in the Spanish capital to work on a blueprint for seizing the region's institutions, police, and finances unless it backs off from independence ambitions.

Both parties were standing firm.

“The government is not giving us any option other than defending the civil liberties of citizens through the best institutional instruments,” Catalan vice president Oriol Junqueres told Spanish television on Wednesday.

Spain's justice minister Rafael Catalá insisted an independence declaration “will have no legal validity”, though it will have “consequences from a criminal point of view”.

READ ALSO: Will Puigdemont make an independence declaration, call elections, or both?

The worst political crisis in Spain in decades was sparked by a “Yes” vote in a banned October 1 referendum on independence for the semi-autonomous region which accounts for 16 percent of Spain's population and 20 percent of its economic output.

The region of 7.5 million people is fiercely protective of its language and culture and has long struggled for autonomy — which was restored after the repressive 1939-1975 rule of dictator Francisco Franco.

Catalans, however, are deeply divided on independence from Spain. About 43 percent of eligible voters — some 2.3 million — turned out for the unregulated referendum.

After the vote Puigdemont subsequently announced, and suspended, unilateral independence, prompting Madrid to turn to the never-before-used Article 155 of the constitution, designed to rein in rebel regions.

It gives the government ill-defined and untested powers to act when the country's “general interests” come under threat.

The senate, where Prime Minister Mariano Rajoy's Popular Party holds a majority, is set to approve measures stripping Puigdemont and his executive of all power.

The measures would come into effect on Saturday, and remain in place for up to six months — until elections are called and a new Catalan parliament sworn in.

Puigdemont on Wednesday turned down an invitation to address senators in Madrid before the week is out, reportedly because he feels Madrid's application of article 155 is now inevitable.

Catalonia is one of 17 regions, with varying degrees of autonomy, that make up Spain.

Some members of Puigdemont's executive have urged him to avoid a full-on clash with Madrid by not declaring independence, but instead calling early elections for a new Catalan parliament.

A few hundred protesters gathered Wednesday outside the offices of the Catalan government, the Generalitat, demanding “independence” and “liberty” from Spain.

Whatever the outcome, observers fear the standoff will spark unrest in the region where tourism numbers have dropped and close to 1,500 companies have removed their legal headquarters since the referendum.