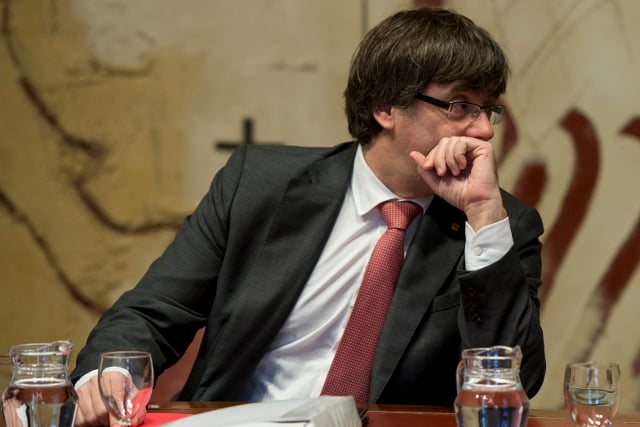 Journalists had gathered for a media conference in Barcelona from the Catalan president which was due to be held at 13.30 local time, but was then initially delayed by an hour. Ahead of it, rumours had circulated among the local press that he would announce early elections in an attempt to halt Madrid from intervening in the region's autonomy.

However, a Catalan government source confirmed to The Local at 14.30 that the president would not speak.

Thursday has been earmarked as a key day in the area's pro-independence drive, with secessionists hoping Puigdemont will unilaterally declare independence based on the results of the contested October 1st referendum deemed unconstitutional by Spain's courts.

When news started to spread that he would instead call regional elections, demonstrators took to the streets of Barcelona to protest against it and in favour of independence.

It is thought that Puigdemont's change of heart came after a spokesperson for the Spanish government said on Thursday that elections would not be enough to stop article 155 measures and intervention in Catalan autonomy from going ahead.

There are divisions among the pro-independence camp over how to move forward in the next 24 hours. One MP from the Together for Yes coalition even announced his resignation over the calling of early elections, with Jordi Cuminal writing on Twitter “I do not share the decision to go to elections. I resign from my position”.

Of the coalition’s member parties, the Republican Left of Catalonia (ERC) in particular is said to be against early elections. The party has threatened to leave Catalonia's pro-independence government coalition if a vote is called.

Influential ERC politician Gabriel Rufián wrote on Twitter on Thursday that “anyone in doubt go out on the streets and look people in the eyes,” adding the hashtag “republic now”.