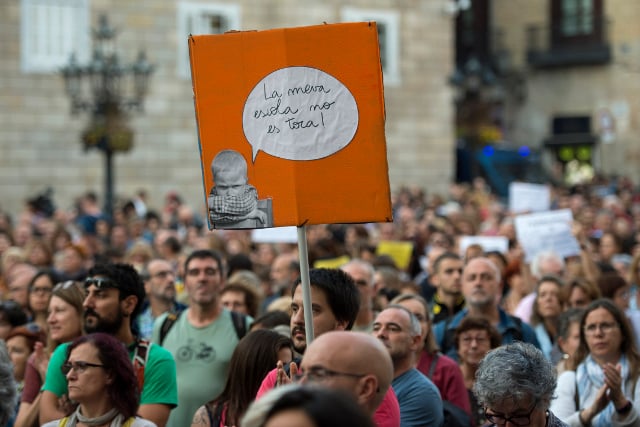 The clock is ticking down to a crux Senate meeting Friday that will likely approve measures proposed by the central government to dismiss Catalonia's separatist executive and take control of the regional police, administration and parliament in a bid to halt independence.

The drastic measures — which follow an outlawed referendum and the Catalan government's refusal to stop moves towards independence — will not go down well in a region which has always been fiercely protective of its autonomy, even if it is deeply divided on independence.

“It's a battle between democracy and totalitarianism,” Antoni Castella, a separatist regional lawmaker told members of the grassroots pro-independence ANC organisation in Barcelona on Tuesday evening.

“I'd go as far as saying that this is a big battle between good and evil,” he told the mixed audience of elderly people and veteran activists, all deeply quiet.

Over on social media, meanwhile, instructions abound over how to wage peaceful resistance.

“The struggle could last a long time,” warns one document widely distributed under the hashtag #enpeudepau (“Stand up for peace” in Catalan), which explains how to form human chains to block access to buildings.

During a sit-in, place “the heaviest people on the front line, legs crossed,” it advises. If charged with police batons, “protect vital organs.”

Back at the ANC meeting, called to organise “civil resistance,” participants suggest going to the Catalan parliament on Thursday, when a plenary session is planned to debate the situation and possibly vote on a unilateral declaration of independence.

That would be a way to put pressure on separatist lawmakers who may be tempted to back-pedal and call regional elections in a bid to ease Spain's worst political crisis in decades — an alternative to declaring unilateral independence.

The idea of new elections is not well-liked by those who want to break away from Spain to validate the October 1 referendum result, held despite a court ban.

READ ALSO: Will Puigdemont declare independence, call elections, or both?

Regional authorities say 90 percent voted for independence, but turnout was just 43 percent as many opponents boycotted the ballot that failed to meet international electoral standards.

“As Catalans, what has our great strength been until now? Peaceful, civilian mobilisation,” Castella told AFP.

“We have to be ready, our agendas cleared.”

The mood was similar in tone at a meeting called across the city, in the Sant Andreu district.

The CUP, a small far-left party whose 10 regional lawmakers prop up president Carles Puigdemont's ruling separatist coalition, gathered around 60 people after a closed-door meeting with activists to prepare counter-measures.

“We must be ready to resist in the workplace,” said Eulalia Reguant, a former CUP lawmaker.

The CUP, as well as the ANC, are organising dozens such meetings throughout Catalonia, as well as other “peaceful resistance” initiatives by other groups. A woman hold a sign reading “I teach peace” during a demonstration in Barcelona. Photo: Josep Lago/AFP

Ruben Wagensberg, founder of “En peu de pau”, insists that all protests must “remain peaceful, so as not to deform the message we want to transmit, which isn't violent at all.”

Marc Ferran, a worker in Catalonia's civil protection agency, says firefighters have taken on the role of maintaining order.

Himself a volunteer firefighter, he says people sometimes have trouble controlling “their rage and anger.” “We contain people, potential agitators or agents infiltrated to break up protests.”

As Castella tells the ANC gathering, “if they make us turn to violence, then we've lost the fight”.