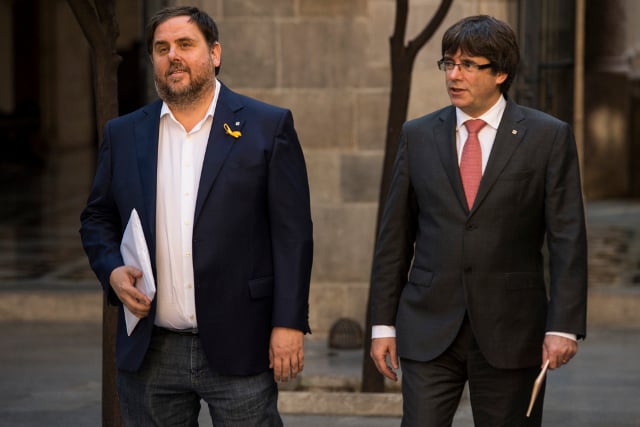 As things stand, it looks like Carles Puigdemont has three options on the table, and none are straightforward.

A declaration of independence

The so-called “nuclear option” would be for Puigdemont to use Thursday's regional parliament session to lift the suspension on a declaration of independence, and make a unilateral declaration of a new state based on the results of the controversial October 1st referendum.

That would certainly be followed by the Spanish Senate approving article 155 measures on Friday, officially removing the Catalan government from power. Pro-independence Catalan news site NacióDigital claimed on Thursday that it has access to an internal Together For Yes document outlining a plan for such a scenario, which would be to declare independence then encourage civil resistance through the support of the pro-independence population in Catalonia. The fallout would inevitably be huge, and long-lasting.

So far the most vocal backer for this option is the CUP, a radical anti-capitalist party that helps prop up the minority Together For Yes government with its votes in the Catalan regional parliament. Impatient, the left-wing party criticised Puigdemont’s PDECat on Tuesday, calling them “the country's elite, scaring people away from mobilizing” and has even asked its followers to apply pressure on Puigdemont by demonstrating in front of the Palau de la Generalitat parliament building in Barcelona.

Perhaps more significantly, support for that option has also been expressed among the Republican Left of Catalonia (ERC) – one of the leading parties in the Together For Yes coalition and the party of vice-president Oriol Junqueras. ERC general secretary Marta Rovira Vergés tweeted on Tuesday that “we already have a democratic mandate: the October 1st referendum. It's the only way to beat the political repression and article 155. We'll take the road towards a republic, now!”.

With that she rejected the two other options being touted, which involve regional elections. A declaration of independence and regional elections

A second possibility is for Puigdemont to make a declaration of independence then also call elections – a way of trying to gain legitimacy through giving the population the chance to vote in their new government while not abandoning the push towards independence.

There could be much to lose from such a move however: the Spanish government would still press ahead with article 155, and the more hard-line pro-independence camp may also take issue with the distraction of yet another vote at a delicate time when they would rather work on nation-building.

READ ALSO: Constitutional and international law experts on what could happen if Catalonia declares independence The third option would be for Puigdemont to abandon a unilateral declaration of independence entirely, and instead call early elections for the Catalan parliament. The biggest reason for doing so would be to try and stop the article 155 measures at the last minute. Spain's main opposition at a national level, the PSOE, has been open to the possibility of pulling back constitutional measures against the region if a vote is called and independence declaration scrapped.

The PP government does not agree, however, and may choose to push ahead with article 155 measures regardless, arguing that it gave Puigdemont a clear deadline to avoid them, and he did not adhere to it. And while there would be a chance for Puigdemont to emerge as a conciliatory figure from such a move, there is also the more likely possibility that it would weaken him – why call elections now, at the last minute and when central intervention in the region may happen anyway, when it was possible to do so a week ago and avoid that entirely?

Perhaps most pertinently for Puigdemont and his PDECat, such a move could also disenfranchise pro-independence supporters and lose them votes. It could equally put at risk their formal alliance with ERC, and certainly provoke the disapproval of the CUP, who are not part of a formal coalition but support them in the Catalan parliament on the basis that both parties are in favour of a road towards independence.

Which of the three roads will Puigdemont take? We will find out when the Catalan parliament holds its session on Thursday. Regardless of the outcome, it looks like fragile political alliances at both regional and national level will be tested.