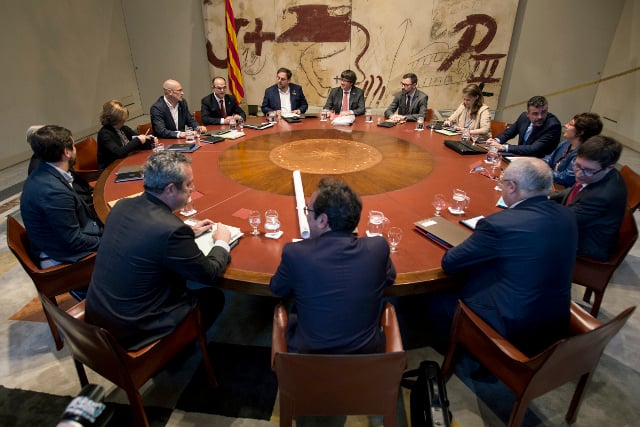 In a bid to hold Madrid at arm's length, several members of Carles Puigdemont's executive have urged him to call elections for a new regional government, a source close to the Catalan leader told AFP.

Other allies, however, are pressuring Puigdemont to follow through on his threat to unilaterally break away the semi-autonomous region that accounts for 16 percent of Spain's population and 20 percent of its economic output.

Civic groups, too, piled on the pressure, organising a march on the regional parliament Wednesday evening to press for an independent Catalan republic.

The region of 7.5 million people is fiercely protective of its language and culture and has long struggled for self-determination.

Its inhabitants, however, are deeply divided on independence from Spain.

READ ALSO: Catalonia crisis could lead to an independence declaration, elections, or both

The country's deepest political crisis in decades was sparked by a “Yes” vote in a banned October 1 independence referendum.

Catalan leaders say 90 percent of participants voted for independence, though only 43 percent of voters — some 2.3 million — turned out in a plebiscite that did not meet electoral standards. Many anti-secessionists stayed away.

Only two days remain before the central government of Prime Minister Mariano Rajoy strips Puigdemont and his executive of all political power under Article 155 of the constitution devised to rein in rebel regions.

This central administration would last for up to six months, until elections are called and a new Catalan parliament sworn in.

The Catalan source, who refused to be named, said a number of regional executive members expressed support at a weekly meeting Tuesday for Puigdemont to call an election in the coming days.

This is widely considered the best way of preventing an intervention from Madrid, though Rajoy's justice minister has said it may not be enough.

According to Catalan daily La Vanguardia, Tuesday's meeting yielded “intense debate” and went on well into the night.

The Catalan parliament is to meet Thursday to formulate a response to Madrid, where the Senate will convene Friday to formally approve measures under Article 155 to take over the region's government and finances.

Unless Puigdemont blinks before then, the powers will take effect once they are published in the government gazette on Saturday.

On Wednesday, Rajoy insisted Article 155 was “the only possible response” to Puigdemont's independence push.

“I am fulfilling my obligation by implementing (Article) 155, faced with contempt for our laws, the constitution, Catalonia's status and contempt for millions of Catalan citizens who see that their government has liquidated the law,” he told parliament.

The stage has been set for a face-to-face confrontation, with the Senate inviting Puigdemont to come state his case in Madrid on Thursday or Friday, with Rajoy likely to attend.

Puigdemont has not yet accepted.

Many fear that the Article 155 measures could spark unrest in the northeastern region, where tourism numbers have dropped and close to 1,400 companies have removed their legal headquarters since the banned referendum.

Committees for the Defence of the Referendum — civilian groups set up to defend the October 1 vote and now spread out across Catalonia — called a protest outside the Catalan parliament under the banner “No 155, no elections. A republic now.”

The groups had mobilised thousands of Catalans to “protect” voting booths against police seeking to break up the October 1 referendum ruled illegal by Spanish courts.

They plan to camp out overnight, to be there for Thursday's parliament meeting.

“As from Thursday, we have to be ready and available to mobilise in the streets,” Catalan MP Antoni Castella told AFP.

An anti-independence march is planned for Sunday in Barcelona.