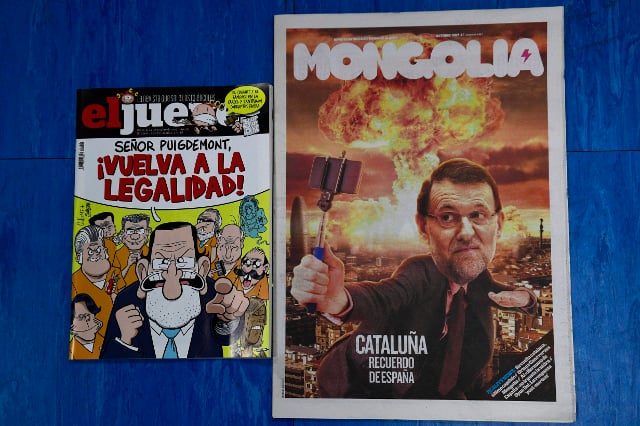 Over the past month, social media networks have been flooded with memes poking fun at the main players in Spain's biggest political crisis since returning to democracy following the death of dictator General Francisco Franco in 1975.

After Catalan leader Carles Puigdemont made a cryptic “suspended” declaration of independence following a banned October 1 referendum on secession, one jokester depicted him as a candidate on a TV dating show with the caption: “Carlos, 54, independent but not too much”.

Carlos is the Spanish version of Puigdemont's Catalan first name.

As calls for dialogue to end the crisis intensified, another popular meme depicted Puigdemont finally talking to Spanish Prime Minister Mariano Rajoy — from behind a glass partition in jail.

Many conservatives believe this is where he belongs for trying to break up Spain.

Internet users compared the expression on her face to adverts for gastric relief medicines.

“People use humour as an escape from this hard reality,” Edu Galan, the founder of satirical monthly magazine Mongolia, told AFP.

Before the independence referendum organised by the Catalan regional government, despite being deemed illegal by the courts and Madrid, jokes over the conflict flourished.

Internet users also had a lot of fun mocking the interior ministry's use of a cruise ship plastered with images of Tweety, the yellow cartoon canary called Piolin in Spain, to house hundreds of extra police officers deployed in Catalonia to try and stop the vote.

But the mood changed dramatically on the day of the referendum. Police fired rubber bullets and charged would-be voters with batons. Videos of the violent crackdown made headlines around the world and deeply shocked Catalans.

The team behind “Polonia”, a popular weekly satire show on Catalan public television even questioned “if it was worth doing the show” that week, for the first time in its 12-year history, one of the show's writers, Albert Martorell, told AFP.

“It was the most difficult show to write because most of us experienced what happened first hand, at polling stations,” he said.

In its first episode after the referendum, Spanish police officers were depicted in a sketch as characters in a war movie called “We Must Save the Spanish Soldier”, beating up grandmothers at a polling station.

“It served as catharsis for people. They say: 'I got hit, but at least I could laugh at it',” said Martorell.

Catalan comedian Txabi Franquesa, said the violence “changed everything” and he now avoids the topic of independence in his routines.

Polls show Catalonia's roughly 7.5 million residents are divided on the issue of independence, though the vast majority are in favour of a legal referendum to settle the issue once and for all.

“Nothing hurts more than national identity,” said Galan, whose satirical magazine recently depicted a cartoon Rajoy taking a selfie in Barcelona as a nuclear bomb goes off over the Catalan capital.

“If everything continues as it has, it is very likely that Rajoy and Puigdemont will agree to end this in the most reasonable way,” the magazine wrote, tongue firmly in cheek.