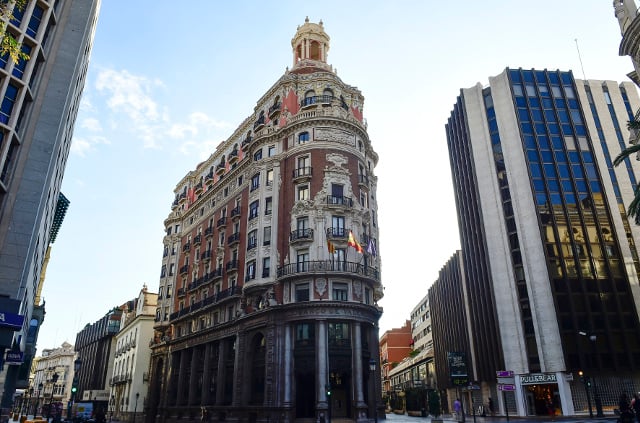 The new headquarters of Caixabank in Valencia. Photo: Jose Jordan/AFP

CaixaBank, which confirmed it has relocated its headquarters from Barcelona to Valencia in response to the Catalan crisis, did not give any details of the amounts of deposits that had been withdrawn.

But chief executive Gonzalo Gortazar told a news conference that the impact in the days following the banned independence referendum on October, had been “moderate”.

The aim of relocating the bank's headquarters was to demonstrate that “CaixaBank's solidity will not change whatever the scenario, and we will always remain within the eurozone,” even as Catalonia's leaders threatened to unilaterally declare independence, Gortazar said.

By staying within the single currency area, the bank would retain the possibility of refinancing itself from the European Central Bank, he explained.

Once the decision to relocate had been taken, “the impact (on deposits) first of all ceased and then reversed,” Gortazar said, again without providing any figures.

Asked whether the relocation would only be temporary, the CEO replied: “If the supervisory board had wanted to say that it was only temporary, it would have said so. It didn't”.

Quizzed as to whether there had been any political pressure to move, Gortazar insisted that the decision was “ours alone”.

CaixaBank said it was sticking to its growth targets for 2017.

But if the Catalan crisis continued, “it could have a very damaging impact on the Spanish economy,” Gortazar said.

Presenting the bank's third-quarter earnings, Gortazar said that CaixaBank's bottom-line net profit doubled to 649 millions euros ($763 million) in the period from July to September, driven by the integration of Portugese lender BPI, which it acquired in February.

By comparison, CaixaBank, Catalonia's biggest bank, had booked net profit of 332 million euros in the third quarter of 2016.

BPI contributed 103 million euros to third-quarter profits this year, the bank said in a statement.

CaixaBank's shares were showing a gain of 0.63 percent at 3.85 euros on the Madrid stock exchange on Tuesday, slightly outperforming the overall market which was up 0.4 percent.