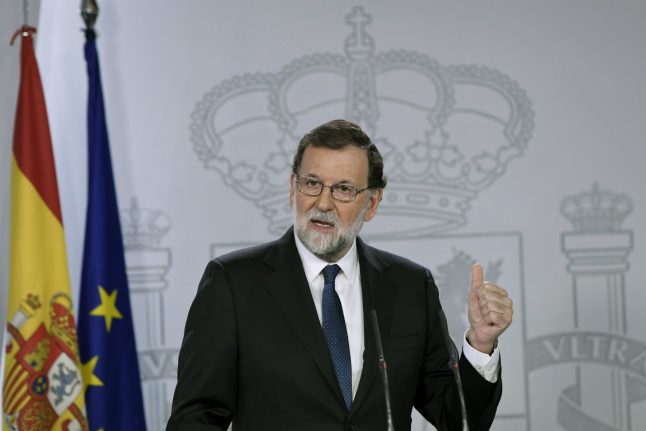 The drastic escalation of Spain's worst political crisis in decades will see separatist leader Carles Puigdemont and his administration stripped of their jobs, Prime Minister Mariano Rajoy told reporters after a crisis meeting of his cabinet.

Puigdemont's threat to declare independence “has been unilateral, contrary to the law, and seeking confrontation,” said Rajoy, adding that he will seek approval from the Senate — where his conservatives hold an absolute majority — for permission to dissolve the Catalan parliament and call elections within six months.

In the meantime, the jobs of Puigdemont and his team will be carried out by Spain's national ministers, Rajoy said.

Puigdemont was due to respond at 9:00pm. In Barcelona, independence supporters took to their balconies banging their pots and pans in protest at Rajoy's decision.

Autonomy is a highly sensitive issue in wealthy Catalonia, which saw its powers taken away under the dictatorship of General Francisco Franco.

Home to 7.5 million people, the northeastern region fiercely defends its language and culture and enjoys control over its policing, education and healthcare.

In a crisis that has rattled stock markets and worried a European Union that is already struggling with Brexit, Catalonia held a banned independence referendum on October 1, with Puigdemont threatening to declare a breakaway state based on its results.

Under Article 155 of Spain's constitution, Madrid enjoys powers to wrest back control of rebellious regions, but it has never used them before.

Rajoy said he had made the decision reluctantly but had no choice in his battle to keep the country together.

“This was neither our desire nor our intention,” he said.

“We are applying Article 155 because the government of a democratic country cannot accept that the law is ignored.”

He also insisted that the measures did not amount to “suspending Catalonia's autonomy or self-government”, saying it was those who have jeopardised these rights “who are being stopped”.

Rajoy said elections had wide backing amongst Catalans who are growing frustrated with politicians' inability to end the deadlock.

“The majority wants it, it is common sense,” he said.

A poll for newspaper El Periodico released Saturday indicated 68 percent of Catalans back elections, although ahead of Rajoy's announcement 66 percent rejected his move to seize powers from Catalonia.

Separatists of all political stripes, from Puigdemont's conservatives to the far-left, have dominated the Catalan parliament since the last elections in 2015, holding 72 seats out of 135.

Saturday's dramatic developments come a day after Madrid won powerful backing from the king and the EU.

King Felipe VI blasted what he said was an “unacceptable secession attempt” and said Catalonia was “an essential part of 21st century Spain”.

“We do not want to give up that which we have built together,” he pleaded.

European parliament head Antonio Tajani, accepting a prestigious prize from the king on behalf of the EU, demanded respect for the law in words that offered implicit backing to Madrid.

“Some are sowing discord by deliberately ignoring law,” he said, adding pointedly: “All too often in the past the prospect of redrawing borders has been presented as a heavenly panacea that has resulted in a hellish mess.”

Puigdemont says an overwhelming 90 percent backed independence in the referendum, but turnout was 43 percent as many Catalans who back unity stayed away from a vote that had been ruled illegal while others were hindered from voting by a police crackdown.

Catalonia is roughly evenly split over whether to break away from Spain, according to polls, with supporters saying the region does too much to prop up the rest of the national economy but their opponents arguing that it is stronger as part of a bigger nation.

Two weeks of political limbo have already taken a toll on one of Spain's most important regional economies, with nearly 1,200 companies shifting their legal headquarters elsewhere in a bid to minimise the instability.