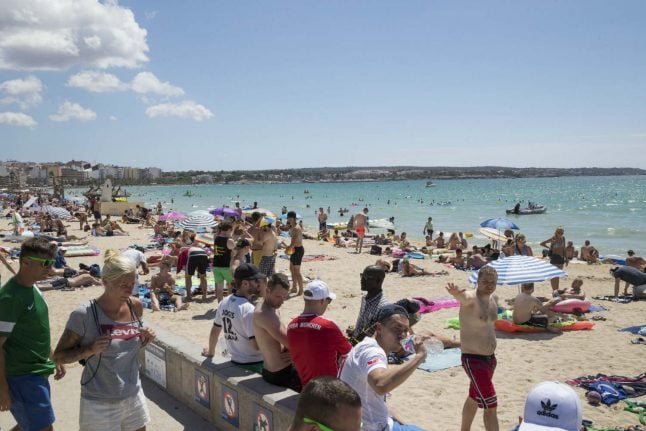 Police have listed 77 law firms allegedly used by the tourists to file their complaints as part of their investigation, a statement said.

The law firms “orchestrated a possible criminal network based on fake claims that have generated significant economic damage to the Balearic and Spanish tourism sector,” it added.

The Balearic Islands — which include Ibiza, Mallorca and Menorca — saw a 700 percent rise in sickness claims from January 2016 until the end of September, with the overall cost of the claims worth four million pounds (4.5 million euros), police said.

Police said the problem of fake food poisoning claims was also affecting Spain's Canary Islands and the Levante region on the eastern Mediterranean coast, which includes the resort of Benidorm, popular with British tourists.

Hotels complain that British claims management companies openly tout for business in Spanish resorts, promising not to charge any fees if no eventual damages are paid out.

An ambulance emblazoned with the words “Claims Clinic” was last year pictured driving around Tenerife on Spain's Canary Islands, where more than one in three tourists is British.

Spanish tourism officials say the problem has arisen because British consumer law does not require claimants to produce any medical evidence of illness, and claims can be filed up to three years after a stay at a hotel.

Spain has stepped up its cooperation with Britain to halt the flood of fake claims which led British Foreign Secretary Boris Johnson to say earlier this year that the digestive “systems of British people” had “become the most delicate in the world”.

The number of British tourists visiting Spain jumped by over 12 percent in 2016 to hit a record 17.8 million.