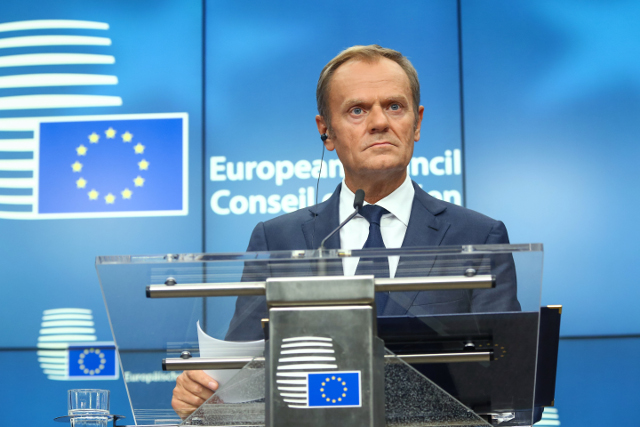 Speaking at a summit in Brussels where Spanish PM Mariano Rajoy is in attendance, Tusk said the bloc would not mediate in a crisis which other EU leaders view as a domestic issue.

“We have all of us our own emotions, opinions and assessments but formally speaking there is no space for EU intervention here,” Tusk told a news conference at the summit.

“We back the position of the Spanish government,” Merkel said as she arrived, while Macron told reporters the summit would be “marked by a message of unity” with Madrid.

Catalonia's La Vanguardia daily — Spain's second biggest newspaper – has urged Puigdemont in an editorial to back down and call elections.

“There's no dignity in collective suicide, even less so when it's decided by one person and everyone suffers,” it said in an editorial.

About 100 pro-independence protesters rallied in the rain outside central government offices in Barcelona on Thursday evening.

They chanted “Independence” and blocked the road, preventing cars from passing.

Separatists complain that Catalonia, which represents about a fifth of Spain's economic output, pours more into the national coffers than it gets back, and say it would prosper if it went its own way.

But opponents say the region has more clout as part of Spain and that the instability could be disastrous for its economy.

On the streets of the regional capital Barcelona, residents were jittery about the prospect of Madrid attempting to take over.

Neither Rajoy nor Puigdemont can be the people to solve this,” he said.

In Madrid meanwhile, residents were warily eyeing the prospect of Spain entering uncharted waters with Article 155.

“The 155 scares me,” said Jorge Arias, a 32-year-old librarian who wants Catalonia to stay in Spain but backs voters' right to have a say on the matter.

“It's an extreme measure of Rajoy's government and it won't solve anything.”

But Alfons Fernandez, a retired engineer, said Rajoy had no choice.

“There is no other way out than Article 155 — if one person wants to talk but doesn't respect the law, then you can't talk,” he said.