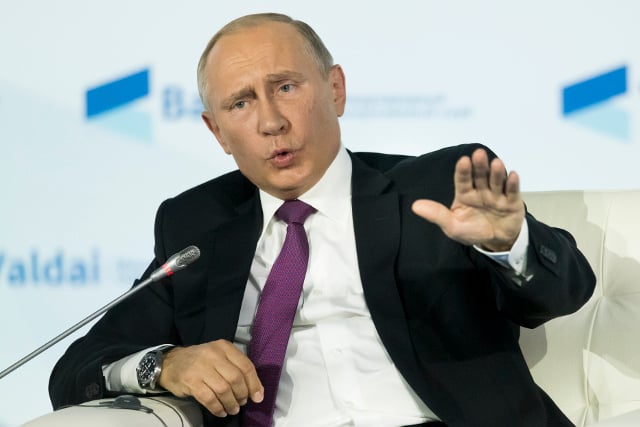 “Russia's position is known here. All that is happening is Spain's internal business and must be resolved within Spanish law and on the basis of democratic traditions,” Putin said at a meeting with international relations experts in the Black Sea city of Sochi.

However, he argued the crisis exposed Western inconsistency and hypocrisy in backing some separatists while opposing others — such as support for Kosovan independence, but opposition to Catalan and Kurdish claims.

“What we see is that in our partners' view there are worthy fighters for independence and there are separatists who cannot defend their rights.”

The Russian leader said Western powers had long been aware of “the antagonism within Europe”, referring to Catalonia.

“They knew, didn't they?” he said. “Yet in their day they practically welcomed the breakup of a whole number of European states, without concealing their glee.”

He cited recognition of independence of majority-Albanian Kosovo from Russia's traditional ally Serbia.

“Why did they have to, so thoughtlessly, unquestioningly support Kosovo's breaking away?” Putin asked.

He accused European countries of “the wish, frankly, to please Big Brother from Washington” over Kosovo, saying this then provoked “similar processes in Europe and the world”.

He questioned why Europe went on to oppose Russia's 2014 annexation of Crimea from Ukraine and independence movements in Spain and Iraq's Kurdistan.

“So now we see Catalonia. In another region there is Kurdistan. And that may still be far from an exhaustive list,” Putin said.

The European Union has urged both sides “to seek dialogue in order to preserve Iraq's unity and long-term stability”.

Moscow says it supports the territorial integrity of Iraq but views Kurdish national aspirations with respect.