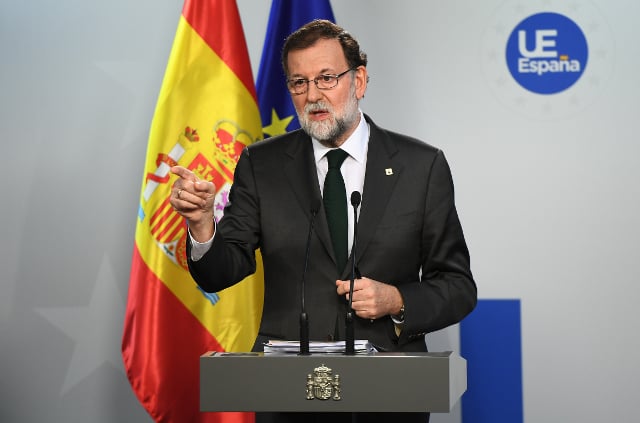 “We have reached a critical point,” Rajoy told a press conference following an EU leaders summit in Brussels that backed his conservative government.

“We have tried by all means to avoid a difficult situation,” he added.

“But you will understand it is difficult for a country, for an EU government, to see… the rule of law being liquidated” in a banned independence referendum in Catalonia, he said.

Asked by a journalist whether one of the measures would be the Spanish state intervening in Catalan public broadcaster TV3, Rajoy “neither confirmed nor denied” if that would be the case.

Opposition PSOE secretary Carmen Calvo told El Diario earlier on Friday that her party had reached an agreement with the governing PP to take control of public broadcasters TV3 and Catalunya Radio in order to “guarantee neutrality”.

Rajoy's cabinet is due to meet Saturday to decide which powers to seize from Catalonia, which controls its own healthcare, education and policing.

Political parties pushed meanwhile for elections as a way out of the country's worst crisis in decades.

Catalan leader Carles Puigdemont has warned any move to seize powers could push regional lawmakers to declare unilateral independence following a chaotic referendum on October 1 on whether to split from Spain.

READ ALSO: Political scientists on where the Catalonia crisis is heading