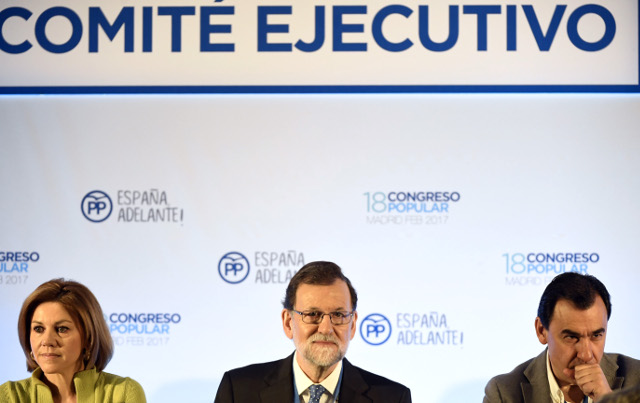 “As long as independence has not been proclaimed, and if (Catalan leader Carles Puigdemont) backs down, there is room to manoeuvre,” Fernando Martinez-Maillo, number three in the conservative Popular Party of Prime Minister Mariano Rajoy, told Cadena SER radio.

Until Spain's Senate convenes to discuss the government's move to start imposing direct control over Catalonia — likely by the end of October — Puigdemont “can change course, can return to constitutional legality,” Martinez-Maillo said.

Spain is struggling with its worst political crisis since emerging from military dictatorship in 1977, after Catalonia staged a banned independence referendum on October 1.

Puigdemont has since been threatening to declare an independent Catalan state, which Madrid bitterly opposes.

Rajoy's government said it would push ahead with steps to seize some of the regional government's powers in semi-autonomous Catalonia after giving Puigdemont until Thursday to back down.

Puigdemont retorted that any such move to impose direct rule — in a region where even Catalans who oppose independence value their autonomy highly — could result in a unilateral declaration of independence by local lawmakers.

Catalonia, a wealthy 7.5-million strong region in northeast Spain, is divided on whether to break away, according to polls.

Puigdemont says he has a mandate to declare independence after the referendum, which his administration says resulted in a 90 percent “Yes” vote.

But turnout was given as only 43 percent as many Catalans who back unity stayed away from the vote.

Spain's Constitutional Court had ruled the referendum illegal and voting day saw a heavy crackdown by police who used batons and rubber bullets against voters in some places.

Rajoy's conservatives are working with opposition Socialists and centrists on the Catalan crisis under a “national unity pact” as they seek to avoid the break-up of Spain.

The Socialists are urging as little state intervention in the crisis as possible.

“The prestige of our rule of law is at stake,” Carmen Calvo, the Socialists' chief negotiator with the government, told public television.

She said pro-unity parties were pushing for fresh regional elections in Catalonia which would allow a potential way out of the crisis by giving voters a say on how to move forward.

News website eldiario.es reported that the Spanish government and their Socialist opponents both agree that elections should be called as early as January, which Calvo confirmed.

“Obviously, there must be elections,” Martinez-Maillo added.

READ ALSO: 'Everything suggests we're heading towards the use of article 155', political scientist says