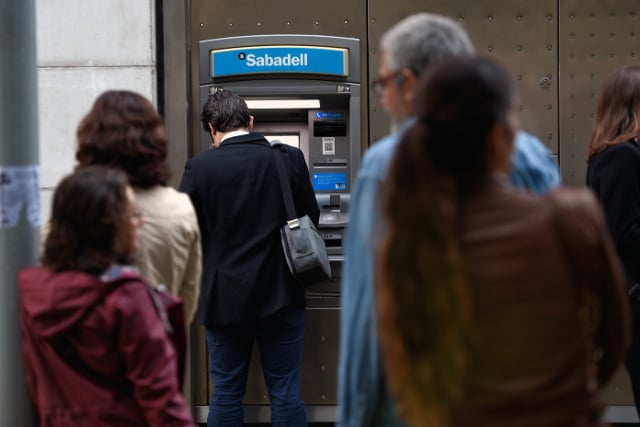 Some protesters were making symbolic withdrawals of 155 euros ($183) — a reference to Article 155 of the constitution, which Madrid is using to start imposing direct rule over semi-autonomous Catalonia as its leader threatens to declare independence.

Others were opting for 1,714 euros in a nod to 1714, a highly symbolic date for independence supporters marking the capture of Barcelona by the troops of King Felipe V, who then moved to reduce the rights of rebellious regions.

“It's a way of protesting. We don't want to do any harm to the Spanish or Catalan economy,” said Roser Cobos, a 42-year-old lawyer who had just taken out 1,714 euros from the counter at a bank in Barcelona, the regional capital.

“It's the only way in which Catalans can show their disagreement with the attitude of the Spanish state.”

Two influential grassroots separatist groups, the Catalan National Assembly (ANC) and Omnium Cultural, had issued a call on social media for activists to take “peaceful direct action” to show their opposition to the government of Spanish Prime Minister Mariano Rajoy.

READ ALSO: Protests in Catalonia over detention of key separatists

The two groups, whose leaders have been detained since Monday pending investigation into sedition charges, specifically urged supporters to withdraw cash from the five main bank chains, “ideally between 8:00 am and 9:00 am”.

#LaForçadelaGent People are queuing at banks in #Catalonia to withdraw money to protest against #Spain's measures.
Photo: @Carles_Ros pic.twitter.com/1gwDNU3ABS

'We have to react'

Joaquim Curbet, a 58-year-old editor, proudly brandished the 155 euros he had just taken out, expressing hope that the protest “would put pressure on the Spanish government”.

Several people could be seen queueing at a CaixaBank ATM on a central boulevard of Barcelona shortly before 8:00 am.

One of its cash machines was already displaying a “temporarily out of service” message ten minutes later.

Marta Bernard, a 53-year-old civil servant in the regional government, shrugged and tried to push her card into it anyway.

“The Spanish government has taken many measures against us, we have to react,” she said. “I'm taking out 300 euros.”

The two biggest banks in wealthy Catalonia, CaixaBank and Sabadell, are among some 900 companies who have moved their legal headquarters to other parts of Spain since the banned referendum, worried that the instability could take a toll on their business.

A CaixaBank spokesman said the bank was “operating normally” on Friday.

Santi Vila, business minister in the regional Catalan government, criticised the protest campaign in a tweet.

“Putting stress on the banks or pursuing economic boycotts are not the best way forward,” he wrote.

“Putting the economy in danger is always an own-goal.”

Some Spaniards have been boycotting Catalan products, such as cava sparkling wine, in protest since Catalonia held a banned independence referendum on October 1.

The Catalan government says it has a mandate to declare independence following what it says was a 90 percent “yes” vote, but it gave turnout of only 43 percent as many pro-unity supporters stayed away.