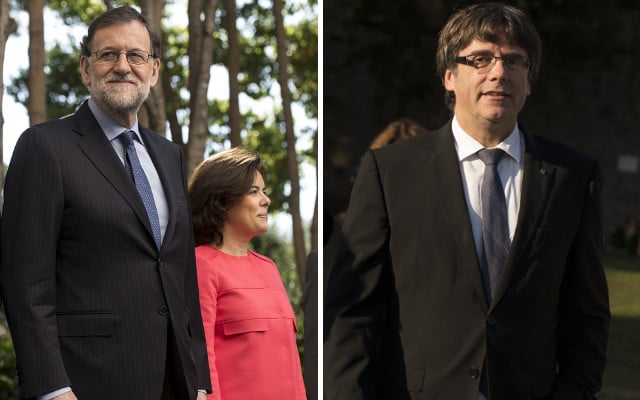 The 62-year-old leader of the conservative Popular Party (PP) has served as Spain's prime minister since December 2011.

Rajoy has headed a minority government since a 2016 general election, backed by centrists Ciudadanos, who were founded in Catalonia as an anti-independence party.

The premier's detractors accuse him of not having done anything to stop separatist sentiment from surging in Catalonia.

Rajoy argues he could not give his approval to an independence referendum in the region because it violates Spain's constitution which declares the country indivisible.

He has refused to rule out an unprecedented constitutional manoeuvre to impose direct rule on the region from Madrid — a move that could spark unrest.

The 54-year-old president of Catalonia, a former journalist, has advocated for independence since his youth.

He became head of the regional government in January 2016.

He is under pressure from hardcore separatists to declare independence in defiance of the central government voters who took part in a banned secession referendum on October 1st overwhelmingly backed breaking away from Spain.

But turnout was just 43 percent as Catalans who favour remaining a part of Spain mostly boycotted the ballot, which did not meet international standards.

Puigdemont has said he is willing to go to jail over his separatist push.

He is under investigation for alleged civil disobedience, abuse of office and misuse of public funds for staging the plebiscite.

Spain's deputy prime minister, 46, is in charge of the central government's relationship with its regions.

She launched an “Operation Dialogue” with Catalonia's separatist government but failed to convince them to drop their plans to hold an independence referendum.

Spain's central government in March promised to invest 4.2 billion euros ($4.9 billion) in Catalonia, mostly in rail infrastructure, between 2017 and 2020.

That was considered by many to be too little, too late in a region which has long demanded more powers and money for infrastructure.