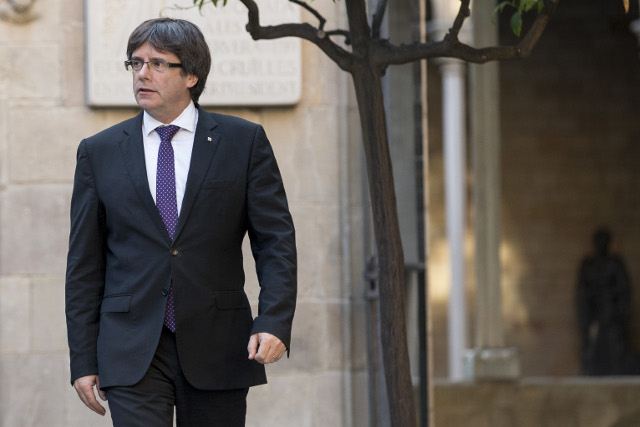 Puigdemont, who sparked Spain's worst political crisis in decades by holding a banned independence referendum on October 1, has been ordered by Madrid to say by 10:00 am (0800 GMT) whether or not he is unilaterally declaring a split from Spain.

The government of Prime Minister Mariano Rajoy says it will trigger Article 155 of Spain's constitution — a measure that would allow it to start imposing direct rule over semi-autonomous Catalonia — unless Puigdemont backs down.

READ ALSO: Analysts on the 'blame game' going on in Spain

Catalonia is deeply divided over whether to break away from Spain as Puigdemont has repeatedly threatened since the referendum, but the wealthy northeastern region is proud of its autonomy in one of the Western world'smost decentralised nations.

There are fears that moving to impose direct rule could further aggravate a crisis that has worried investors and added to the woes of a European Union already grappling with Brexit.

A top official in Puigdemont's PDeCat party, Marta Pascal, told reporters that if Madrid triggers Article 155, then party members would ask him to declare independence outright.

But Madrid appeared to offer the separatists a potential last-minute way out in the form of fresh regional elections.

Polls sanctioned by Madrid — unlike the referendum, which the Constitutional Court ruled illegal — would allow Catalan voters to have a say on how to move forward.

A Spanish government source told AFP that elections could be considered “a return to legality” by Puigdemont, while opposition leader Pedro Sanchez said Madrid would “without a doubt” back off from triggering Article 155.

A Catalan government source said Wednesday that elections were “not one of our priorities” but did not rule them out.

“We are not going to react to non-official declarations from the government,” the source said. “We are waiting to see what (Madrid) will decide tomorrow.”

Puigdemont claims the chaotic referendum resulted in a 90 percent “Yes” vote, but the turnout was only 43 percent as many supporters of Spanish unity stayed away.

Spain has been in limbo since the referendum, when images of police dragging voters by their hair and throwing them down stairs shocked the world.

Barcelona football club's Camp Nou stadium displayed a massive banner emblazoned with the words “Dialogue, Respect and Sport” when it reopened Wednesday for its first match since playing to empty seats in protest at the violence against voters.

Puigdemont issued a cryptic “suspended” declaration of independence following the vote, saying he wanted time for talks with the government — a prospect Madrid has rejected.

“All I ask of Mr Puigdemont is that he acts with good sense,” Prime Minister Mariano Rajoy told parliament Wednesday.

Catalans have grown increasingly frustrated with politicians' failure to find a way out of the deadlock, while the prolonged uncertainty is taking a toll on one of Spain's most important regional economies.

More than 800 companies have moved their headquarters out of Catalonia in a bid to minimise the instability, while the national government has cut its growth forecast to 2.3 percent next year, pointing blame at the crisis.

Separatists argue that Catalonia, which represents about a fifth of Spain's economic output, pours more into the national coffers than it gets back and would prosper if it went its own way.

But opponents say the region has more clout as part of a bigger Spain and that the instability could be disastrous for its economy.