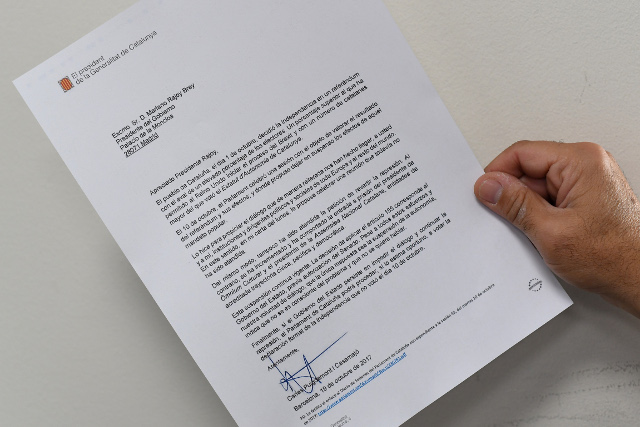 In his second letter to Rajoy in less than a week, Puigdemont again avoided giving a straightforward concrete “yes or no” answer on whether he had declared independence as the Spanish government had asked for, instead focusing once more on his offer for dialogue.

“If the central government persists in impeding dialogue and continues with repression, the Catalan Parliament can proceed – if it considers it appropriate – to vote on a formal declaration of independence,” Puigdemont warned in the letter.

In what could be interpreted as a key phrase, Puigdemont also pointed out that Catalonia's parliament did not vote on a formal declaration of independence on October 10th, at the session in which the president “suspended” its effects.

“This suspension continues to be active. The decision to apply article 155 is the central government's, pending authorization from the Senate. Despite all of our effort and willingness for dialogue, for the only response to be the suspension of autonomy suggests (the PM) is not conscious of the problem and does not want to talk.”

If approved by the Senate, activating article 155 of the Spanish constitution would allow Madrid to intervene in Catalonia's autonomy.

Puigdemont also wrote that the Spanish government's “repression” has increased since his last letter to Rajoy, referring to the detention of Jordi Cuixart and Jordi Sanchez, leaders of pro-independence grass roots organizations ANC and Omnium Cultural.