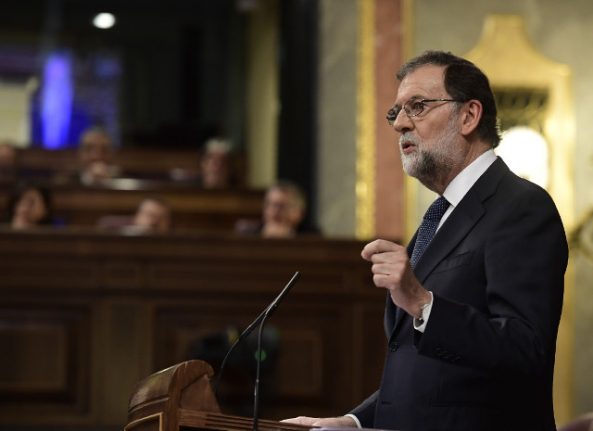 If separatist leader Carles Puigdemont does not provide a satisfactory response by 08.00 GMT on Thursday, “Mr Puigdemont will provoke the application of article 155 of the constitution,” Soraya Saenz de Santamaria told parliament.

This provision of the constitution — which has never been used before — would open the way for Madrid to impose direct rule over the semi-autonomous region.

Triggering it could represent a drastic escalation of Spain's worst political crisis in decades which was sparked when Catalonia held a banned independence referendum on October 1.

Puigdemont declared independence following the poll which he says resulted in a 90 percent “yes” vote, though turnout was only 43 percent as many supporters of Spanish unity stayed away in a region that is deeply divided on the issue.

But the Catalan leader said he was “suspending” independence to allow time for talks with the government — a prospect Madrid has rejected, leaving the country in limbo.

Prime Minister Mariano Rajoy has given Puigdemont until Thursday to come up with a definitive answer on the independence question, or face the consequences.

“All I ask of Mr Puigdemont is that he acts with good sense,” Rajoy told parliament on Wednesday.

The premier would need Senate approval to trigger article 155, but his conservative Popular Party has a majority there.

The move could ultimately allow Madrid to suspend the regional government and eventually trigger new elections for Catalonia, but such a move risks inflaming tensions in the region even further.

Jordi Xucla, a lawmaker from Catalonia's ruling coalition, told Rajoy in parliament that such a move would be “a serious mistake… its application would be difficult and questionable.”