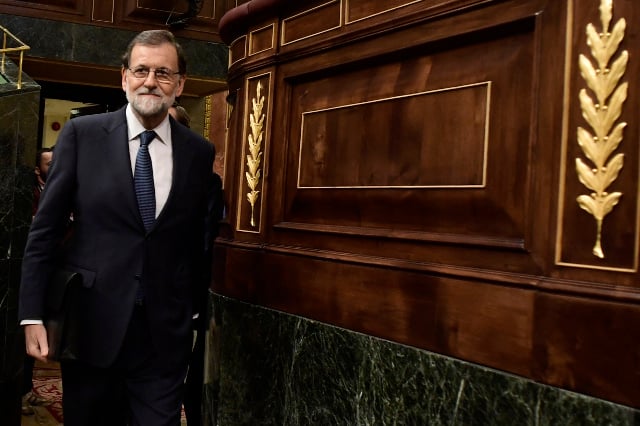 Catalan leader Carles Puigdemont has until 08.00 GMT on Thursday to tell Madrid whether or not he is declaring independence from Spain.

If he does not give a clear response, the central government says it will take the unprecedented step of seeking to suspend Catalonia's autonomy.

This would involve triggering the never before used Article 155 of Spain's constitution — the so-called “nuclear option” which opens the way for Madrid to impose direct rule over the semi-autonomous region.

How did we get here?

Puigdemont then suggested he could declare independence in the wealthy northeastern region but offered to “suspend” secession to give time for negotiations with Madrid — prompting the central government to give him until Thursday morning to clarify his intentions.

Failing a final answer, the government says it will trigger Article 155 in a move that would further escalate Spain's worst political crisis since it emerged from military dictatorship in 1977.

While Puigdemont points to what he said was a 90 percent “yes” vote in the referendum, many who back unity with Spain in the deeply divided region stayed away, with turnout of only 43 percent. What does the constitution say?

Under its constitution adopted in 1978, Spain is one of the Western world's most decentralised nations.

Its 17 regions have varying degrees of control over issues such as education and healthcare, with Catalonia among those with the most autonomy.

But Article 155 says that if a region's government breaches its constitutional obligations or “acts in a way that seriously threatens the general interest of Spain”, Madrid can “take necessary measures to oblige it forcibly to comply or to protect said general interest”.

What would be Madrid's next steps?

Article 155 would allow the central government to “take control of political and administrative institutions of the rebel region”, Teresa Freixes at the Autonomous University of Barcelona told AFP.

According to Javier Perez Royo of the University of Seville, measures could include “suspending the regional government, placing the (Catalan police force) Mossos d'Esquadra under the orders of the interior ministry” and even “closing the regional parliament”.

Madrid could also use Article 155 to call regional elections in Catalonia in a bid to overcome the political impasse, said Jose Carlos Cano Montejano at Madrid's Complutense University — a very likely option.

READ ALSO: Political analysts on where the Catalan stalemate is heading

How does the triggering process work?

Rajoy could not invoke Article 155 unilaterally.

He has already taken the first step — informing Puigdemont of his intention, allowing him a period of grace to fall in line.

Next, Rajoy would turn to the Senate, Spain's upper house where his conservative Popular Party holds a majority.

The government would have to send a list of the specific actions it is planning to take under Article 155 to the Senate, which would need to be debated and approved by a committee, said Antonio Barroso, analyst at thinktank Teneo.

After that the text would be sent to the Senate plenary for a debate and final vote.

The whole procedure would take about a week.

Article 155 is just one of several options Rajoy has in seeking to head off Catalonia's separatists.

The government could declare a state of emergency, which would usher in limits on freedom of movement and assembly, said Cano Montejano.

And legislation signed in 2015 could allow Madrid to argue the Catalan standoff amounts to a national security crisis which would allow it to claim additional powers such as passing laws by decree or taking direct control of Catalonia's regional police force.

The government can also let the criminal cases which have been opened against Catalan leaders run their course.

Puigdemont is under investigation for civil disobedience, abuse of officeand misuse of public funds. If convicted, he would be banned from holding public office.

Catalan police chief Josep Lluis Trapero has been charged with sedition — a crime that carries up to 15 years' jail time — for failing to stop the referendum going ahead.

Pro-independence leaders Jordi Cuixart and Jordi Sanchez have also been charged with sedition and detained pending an investigation.