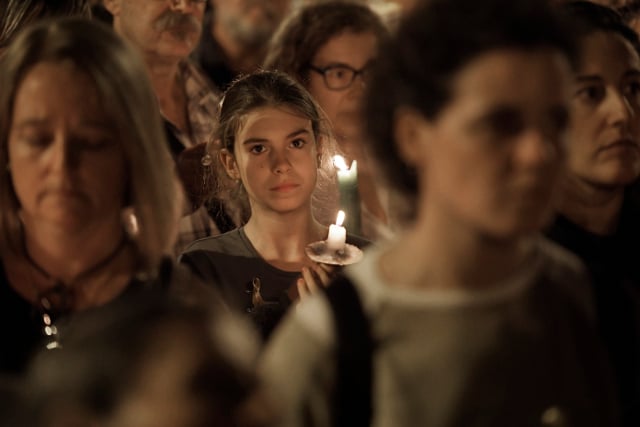 As the crisis drags on, with Madrid and Catalonia's leaders refusing to budge in their high-stakes standoff over the Spanish region's independence drive, Catalans find themselves caught in the middle in a tense climate of uncertainty.

October has been an eventful month, from a banned independence referendum marred by police repression to mass rallies for or against breaking away from Spain, heightening divisions among friends or families.

“These events have a clear psychological impact on adults, children and teenagers — all ages,” says psychoanalyst Jose Ramon Ubieto.

Most of his patients have dedicated entire sessions to the crisis, “children too,” he says.

“The other day, a girl told me that the mother of another girl had asked her if they were on the side of the goodies or the baddies after the police charges.”

He was referring to the independence referendum that took place on October 1 despite a court ban, and led to a crackdown by police that at times saw them baton-charging and firing rubber bullets at people defending polling stations.

There is much talk of divisions between those for and against independence, but a lot of people are undecided too, and can suffer from angst, says Ubieto.

“There is a conflict of loyalties, of people who don't really know how to position themselves, because the parents may be unionists or constitutionalists, and the siblings pro-independence,” he says.

“They're in the middle and don't know who to be loyal to, to their parents or to their siblings, or to themselves, without really knowing what that is.”

But even some of those who have it clear suffer from anxiety.

On the streets of central Barcelona, Josep, 53, a pro-independence engineer who refuses to give his last name for fear of being recognised, complains that Madrid wants to “humiliate” them by cracking down on the Catalan leaders' drive to split from Spain.

He and his father have trouble sleeping “due to anxiety, and rage,” he says, particularly after the referendum violence.

Over on the other camp, Nuria Lago, a 64-year-old translator, is equally enraged.

“I'm angry with everything that has happened, they're making me feel I'm not Catalan, but I was born here, my parents are buried here,” she says.

She adds she has been called a “fascist” because she is against independence. “That's just not true.”

READ ALSO: Thousands protest in Barcelona over detention of separatists

To make matters worse, Barcelona was only recently the scene of a terror attack on August 17 that saw a van plough into pedestrians in the popular La Rambla boulevard, killing 14.

Ingeborg Porcar, head of the Barcelona Crisis Unit that deals with trauma and conflict situations as part of the Autonomous University of Barcelona, says they see many people “who were affected by the attack.”

They had been “trying to get things back on track, and this has re-opened the wounds of the attack.”

“Every time there is a new jolt in the streets, all efforts they have made to go back to normal and to stop being afraid on the streets go downhill, because a traumatic event reminds them of the previous one.” A floral tribute to the victims of the terror attacks in Catalonia. Photo: Lluis Gene/AFP

Even if the current crisis with its mass, peaceful rallies, is far different from the violence of the attacks, she says people are still on their guard as they fear renewed police action or unrest.

This creates a situation of “hyper alertness which isn't what people need,” she says.

“This sensation of losing control, insecurity, is what we know leaves after-effects.”

But the situation is also impacting other Spaniards beyond Barcelona and Catalonia, says Guillermo Fouce, psychology professor at Madrid's Complutense University.

He says he has noted an “increase in anxiety” among residents in the Spanish capital.

“There are people who feel their very identity is under attack,” he says, adding many “can't disconnect from the issue.”

For him, a good solution to let go is to resort to humour.

The memes that are proliferating on social media, for instance, “are tools to reduce stress, to simplify things and that's good.”

And it's crucial to remember “that life continues, that this doesn't affect us as much as it seems.”