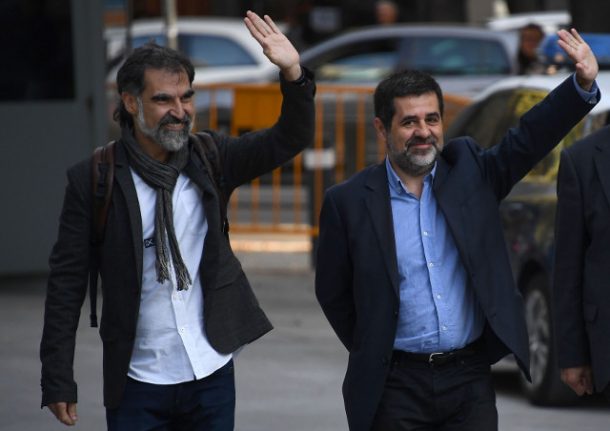 Protests broke out in Catalonia's capital Barcelona on Monday as news spread that Jordi Cuixart and Jordi Sanchez were being kept behind bars on sedition charges.

The pair are the leaders of pro-independence citizens' groups Omnium Cultural and the Catalan National Assembly (ANC) respectively, both of which count tens of thousands of members and have emerged as key players in the Catalonia crisis.

They are accused of stirring up major protests in the run-up to the banned October 1 independence referendum in the region of 7.5 million people which has its own language and culture.

“The state is playing at provocation,” Catalan government spokesman Jordi Turull said after the National Court ruling, as the two groups furiously called on the people of Catalonia to protest, with a strike planned for Tuesday.

Calls for protest spread on social media with demonstrations planned in Catalonia and beyond, including London. Some people will stop work briefly at midday to call for the “release of political prisoners”.

Hundreds of independence supporters gathered outside Catalan government offices, some singing the region's hymn and holding signs that read “Freedom for political prisoners”.

Prior to his detention, Jordi Cuixart recorded a video message to be released only if he was held, which was sent out overnight.

“If you're watching this video, it's because the state has decided to deny me my freedom,” he said, adding that his organisation would work “underground” and peacefully to further their cause.

Catalan police chief Josep Lluis Trapero also appeared in court on sedition charges, facing up to 15 years in jail for allegedly encouraging protests and failing to stop the referendum — though he was allowed to walk free.

The ruling against Cuixart and Sanchez came after another day of twists and turns as Spain struggles with its worst crisis since it returned to democracy in 1977 following the death of dictator Francisco Franco.

Madrid warned Catalonia's separatist leader Carles Puigdemont he only had three days to “return to legality” after he refused to say whether he would declare independence outright following the referendum outlawed by the courts and Madrid.

He had been initially ordered to give his answer by Monday, but stopped short of giving a definitive response and instead called for talks with Prime Minister Mariano Rajoy.

Spain has given him until 08.00 GMT on Thursday to clarify, but anything less than a full climb-down is likely to prompt moves by Madrid to impose unprecedented direct control over the semi-autonomous region.

“You still have time to answer clearly and simply,” Rajoy urged Puigdemont, warning that weeks of instability were damaging the Spanish economy.

As if to emphasise the point, Madrid announced late Monday that it was cutting its growth forecast for next year from 2.6 percent to 2.3 percent, blaming uncertainty created by the Catalan crisis.

Puigdemont declared last week that he was ready for Catalonia to “become an independent state” after the referendum produced a 90 percent “Yes” vote.

However, turnout was only 43 percent in the region deeply divided over independence and many of those who back unity with Spain stayed at home.

The Catalan leader subsequently said however that he was “suspending” his independence bid to allow time for negotiations with Madrid — leaving Spain in limbo, rattling stock markets and worrying European leaders who are already grappling with Brexit.

Puigdemont and some separatist allies want mediation with Madrid over the fate of the region, an idea the central government says is a non-starter.

Antonio Barroso, an analyst with Tenio Intelligence, said Rajoy's likely next step will be to trigger article 155 of Spain's constitution — a move that could result in Madrid taking full control of Catalonia, the so-called “nuclear option”.

Separatists argue the northeastern region — representing about a fifth of Spanish gross domestic product — could prosper if it went its own way.

But those who back unity say a split would spell economic and political disaster.

The two biggest Catalan banks have already moved their legal headquarters to other parts of Spain, while ratings agency Standard and Poor's has warned of a recession in the region if the crisis drags on.