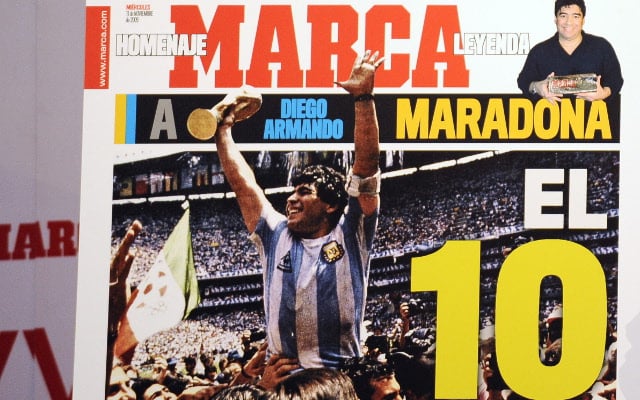 File photo of a Marca cover not related to the story. Photo: Javier Soriano/AFP

The Madrid-based sports paper included the comment in a preview piece ahead of Real Madrid's Champions League meeting with Spurs on Tuesday, in which it is written in large text that the club is “hated, but with good footballing style”.

Smaller text underneath reads that “their Jewish origins have historically made them a club disliked by rival fans, but in their 135 years of existence they have always had style and good players”.

Spurs have a strong Jewish following among their support but the club was actually founded by people at the Hotspur Cricket Club and nearby Grammar School in 1882. The English side responded to the article by saying they were “astonished” that a publication presenting itself as a source of professional journalism would publish the “blatantly wrong and wholly distasteful” piece.

“We are astonished that a publication such as Marca, which presents itself as an alleged source of professional journalism, has seen fit to publish such an article which is blatantly wrong and wholly distasteful,” British newspaper the Independent quoted a Spurs statement as saying.

On Monday afternoon, Marca published an apology by the journalist who wrote the article in which he claimed that the controversy over the piece was down to an “erroneous interpretation of the term 'hated', which was also used in the text”.

“This 'hatred' Tottenham suffers from is very much focused among the radical and racist groups that are hiding among the fanbases, especially at Chelsea and West Ham. Evidently these groups do not come close to representing English supporters or society,” Enrique Ortego wrote.

“I regret the confusion that could have been created in that respect. The intention is not to hurt the image of Tottenham, a club we respect, value and admire – without going any further, one of their players is the star of our front cover today – and nor do we want to serve as a loudspeaker for this racist minority, which still exists in football, and use any excuse to expand their message of hatred, which we totally reject.”