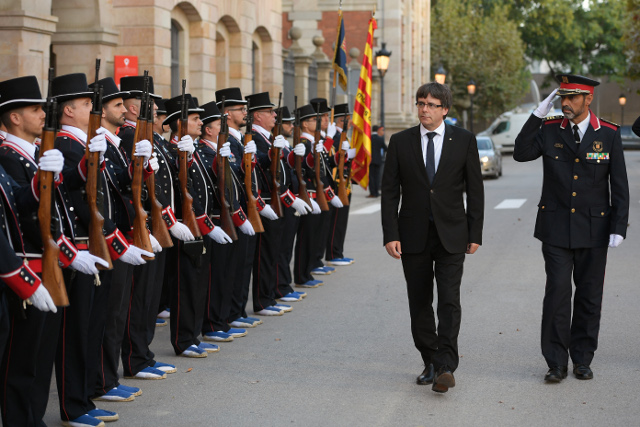 For the second time in 10 days, Josep Lluis Trapero has travelled to Madrid's National Court, which among other things deals with national security cases, to answer accusations of “sedition”, a crime that carries a jail term of up to 15 years.

The head of the Mossos d'Esquadra regional force is accused of failing to contain protests that followed arrests and searches in Catalonia last month by national police as part of a crackdown on the banned independence referendum.

Trapero is to appear in court just as Catalonia pro-independence leader Carles Puigdemont responded to a request to clarify his ambiguous stance on secession to the central government.

Trapero, who has 27 years' police experience, was largely unknown to Catalans when he became head of the Mossos in April.

His only previous brush with fame was a video that appeared on social media in 2016 of him wearing a floral print shirt and a straw hat, singing and playing guitar with Puigdemont.

But he quickly became a household name in August for his role in leading the investigation into the jihadist cell that carried out vehicle attacks in Barcelona and the nearby seaside resort of Cambrils, killing 16 people.

After the attacks, Trapero appeared on television around the world as he explained the status of the probe during daily press conferences. Within four days, the Mossos had tracked down and shot dead the main suspect.

Trapero, the son of a taxi driver, who grew up on the outskirts of Barcelona, became a local hero and Catalans covered Mossos vehicles with flowers.

T-shirts went on sale with his reply to a Dutch journalist who complained at a news conference that he did not understand his statements in Catalan: “Well, then, fine, goodbye”.

But he is a divisive figure in Catalonia, a region deeply split over independence.

He is accused of disobeying court orders to prevent the Catalan regional government from going ahead with a banned independence referendum.

Trapero, who has a law degree, refused to put himself under the coordination of a high-ranking central government official before the plebiscite.

He shunned a meeting with prosecutors and an internal Catalan government memo revealed that he ordered his officers not to use force to shut down polling stations.

The Mossos defended themselves, saying they stopped voting at 446 polling stations and that a more aggressive intervention would have been counterproductive.