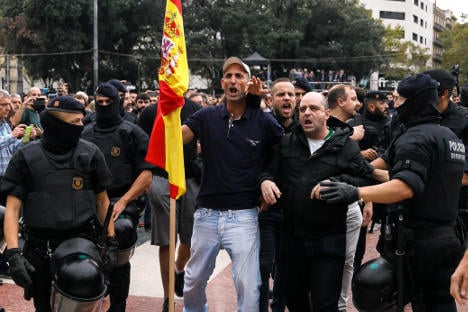 Not far off on Barcelona's mountain of Montjuic, several hundred other far-right supporters rallied, holding fiery speeches next to a stand selling memorabilia like Adolf Hitler's “political testament” or items marked with “SS”, the insignia of the Nazi elite force.

Small groups of far-right supporters have gathered on other occasions in Barcelona, or further afield in Valencia or the Balearic Islands – parts of Spain with strong regional identities – sparking scuffles.

While these types of incidents have happened in the past, some fear that the far-right could grow stronger if the face-off between Spain's central government and Catalan leaders who want to break away persists.

“The longer the polarisation (in Spain) and the harder it is to resolve the conflict, the more the potential for these groups to get organised and gain political influence, or take to the streets,” says political analyst Pablo Simon.

“There have never been such big protests with Spanish flags, and that's what these groups are taking advantage of to grow bolder and expand.

Historian Xavier Casals, who specialises in the far-right, counters that there is currently no political party with a brand strong enough to capitalise on the Catalan crisis.

But he adds it is difficult to gauge what will happen as “the situation in Catalonia is evolving rapidly, with unpredictable and changing scenarios.”

Unlike other European countries such as France or Germany, Spain's far-right is very much on the margin and “has been hugely fragmented since the start of the 1980s,” says Jordi Borras, a photojournalist who has long studied the issue.

The country's national parliament has not had any far-right lawmaker since 1982.

After Spain transitioned to democracy in the 1970s, the far-right found itself unable to broaden its appeal beyond nostalgia for Francisco Franco's 1939-1975 dictatorship, says Borras.

Not only that, but many people who identify with the far-right vote for Spain's conservative Popular Party, which is currently in power, he adds.

But while issues such as immigration or Islamophobia federate the far-right in other countries, “the catalyst for Spain's far-right is Catalonia's independence movement, because their main obsession is guaranteeing Spain's unity,” says Borras.

On Thursday in Barcelona, Manuel Andrino, leader of the Falange, a small far-right party, pointed out in an angry speech that Madrid was hosting its traditional national day military parade.

“I don't think there's any parade to celebrate, and even less in Madrid. Our army needs to be here, now, with our compatriots,” he shouted.

Sociologist Narciso Michavila says that while opinion polls show “a rise of parties like Vox,” they still don't have much support.

But Catalan nationalist leaders, in his opinion, “have spread xenophobia with regards to other Spaniards,” with themes such as “Spain is robbing us,” in reference to a widely-used complaint that Catalonia pays more in taxes to Madrid than it gets back.

Michavila says this has contributed to the far-right's response to the Catalan crisis at a time of high political tension.

“At the end of the day, extremes need each other,” he says.

“They live off this radicalness and this confrontation.”

Borras, meanwhile, says he has “been warning for a while that things will escalate.”

“It's very probable that there will be more incidents.”

By Marianne Barriaux and Alvaro Villalobos