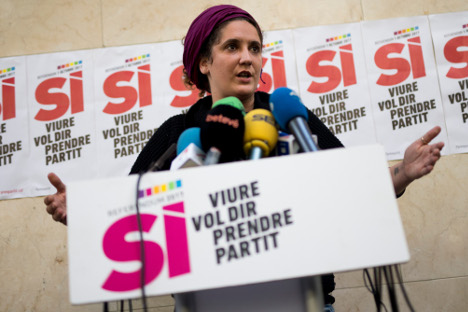 “Dialogue is impossible, mediation is impossible,” said Nuria Gibert, a spokeswoman for the far-left CUP party, which has consistently called for swift secession from the rest of Spain.

The CUP is a key ally of the Catalan government, as it has 10 lawmakers in the regional parliament without which the ruling separatist coalition would not have an absolute majority.

Puigdemont last week said he accepted the mandate from a banned October 1st referendum for “Catalonia to become an independent state” but added he was suspending independence pending talks with Madrid.

Prime Minister Mariano Rajoy responded by giving Puigdemont until next Thursday to abandon his secession push, failing which he may trigger unprecedented constitutional steps that could see Madrid take control of the semi-autonomous region.

The separatist leader has until an initial Monday deadline to decide on his plans.

“We demand that Mr. Puigdemont's response on Monday be clearly affirmative,” Gibert told reporters in Barcelona.

“He must lift the suspension and there must be a solemn and comprehensible proclamation of a republic to citizens,” she added.

She also warned the CUP would look to mobilise people on the streets next week.

On Saturday, another senior separatist official, Catalan vice-president Oriol Junqueras, said the offer of talks with Madrid was aimed at negotiating the region's independence from Spain, rather than halting it.