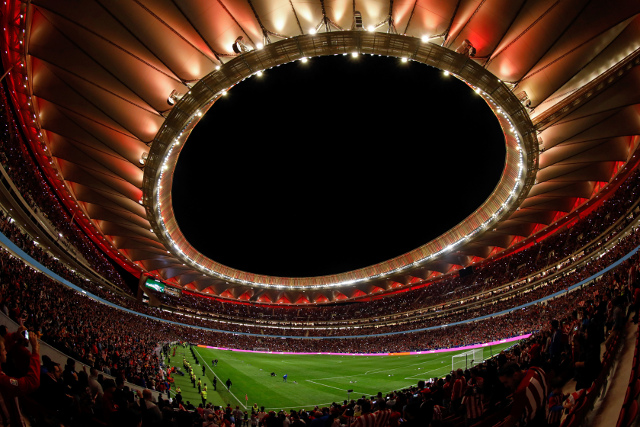 Atletico Madrid's Wanda Metropolitano will be an even more hostile environment for Barcelona with the backdrop of tension in Spain. Photo: Oscar del Pozo/AFP

“It was one of the worst moments we've experienced,” Barça captain Andres Iniesta told Catalunya radio this week. “It was a bit surreal.”

Iniesta, 33, signed a first ever “contract for life” at Barça last week, a day after calling on both sides of the political spectrum to negotiate.

However, deep divisions remain despite Catalonia president Carles Puigdemont's decision to suspend the effects of a unilateral declaration of independence on Tuesday.

“It has reached a point which isn't good for anyone,” added Iniesta. “Those in charge have to resolve it.”

Only 250 tickets have been made available to away fans at Atletico's new 68,000 capacity Wanda Metropolitano.

However, many Atletico fans have taken to social media to encourage supporters not to politicise the match by waving Spanish flags by using the hashtag “our flag is red and white” on Twitter.

Barcelona defender Gerard Pique has been outspoken in his call for Catalonia's right to self-determination, although he has never publicly backed independence for the region.

Pique was jeered when playing for Spain in Alicante last week, but he received support for his willingness to speak out from Atletico defender Filipe Luis.

“I am a fan of Pique even if at times I don't agree with what he says,” the Brazilian told El Mundo.

“He puts himself out there, he doesn't hide behind his fame to not say what he thinks.

“It is admirable and I wish more footballers were like him.”

Despite a series of distractions, including the loss of Neymar to Paris Saint-Germain and calls for Barça president Josep Maria Bartomeu to resign on top of the Catalonia crisis, Barça have started La Liga with a perfect record after seven games.

That spectacular form has been thanks to Lionel Messi's 14 goals in 11 appearances for Barça this season, and the five-time World Player of the Year also rescued Argentina's floundering World Cup qualifying campaign with a stunning hat-trick against Ecuador on Tuesday to ensure their place in Russia next year.

“Messi is so good he can win La Liga himself with a mediocre team, which isn't the case,” added Luis.

“Barça have remained at the top for so many years thanks to him.”

Atletico have yet to beat Barça in 11 La Liga meetings since Diego Simeone took charge in 2011.

However, Barca are often vulnerable immediately after an international break with the likes of Messi and Luis Suarez only returning to training in Barcelona on Friday.

“We are coming from the national team and they are an opponent that demands 200 percent from you,” added Iniesta.

“If we are not at the level required, we don't stand a chance.”

Iniesta is, though, expected to be fit after missing Spain's final World Cup qualifiers with a hamstring strain.

Real Madrid are seven points adrift of Barça, but can close the gap at the top earlier on Saturday when they travel to Getafe.

However, Madrid coach Zinedine Zidane will have to cope without the injured Gareth Bale, Keylor Navas, Dani Carvajal and Mateo Kovacic.