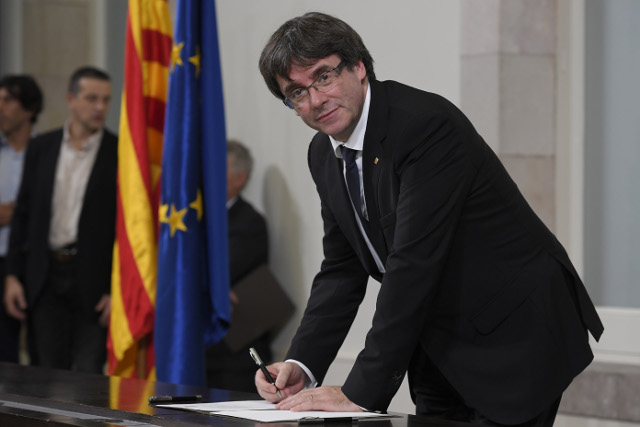 Popular Unity Candidacy (CUP), a radical anti-capitalist party that helps prop up Puigdemont's Together for Yes (Junts pel Si) coalition in the Catalan parliament, published a letter addressed to Puigdemont on Friday morning in which it insists that “the proclamation of the republic is necessary”.

“If they (the Spanish government) intend on continuing to apply the previsions of article 155 of the Spanish constitution – with the formal requisites now already met – and they want to continue threatening and gagging us, then let them do it with the republic already proclaimed,” the letter notes.

On Tuesday, Puigdemont told Catalonia's regional parliament that the October 1st plebiscite deemed unconstitutional by Spanish courts had given him a mandate for an independent Catalan republic, but he immediately asked for the independence declaration signed by him and his allies to be suspended in the hope of dialogue and international mediation.

CUP has criticised Puigdemont for a “missed opportunity” in his decision however, exposing fractures in the pro-independence camp just a few days after the speech.

The move follows a similar call from major pro-independence organization Catalan National Assembly (ANC), which released its own statement late on Thursday saying the suspension should be lifted due to the “rejection from the Spanish state of any kind of proposal of dialogue”.

On Wednesday, Spanish PM Rajoy began the formal process of triggering constitutional article 155, which would allow Madrid to impose control over Catalonia's devolved powers, by giving Puigdemont an October 16th deadline to clarify whether he was going to push ahead with independence.

According to ANC, Rajoy's move meant it “made no sense to maintain the suspension of the declaration of independence”.

Puigdemont's predecessor Artur Mas also weighed in on Friday, telling Catalan public broadcaster TV3 that “neither the CUP, nor ANC, nor any other entity presides over the Catalan government”.

“Everyone will play their role, but ultimately there is a government and a president that must take the decisions they are tasked with,” he added.

READ ALSO: Constitutional and international law experts on what could happen if Catalonia declares independence