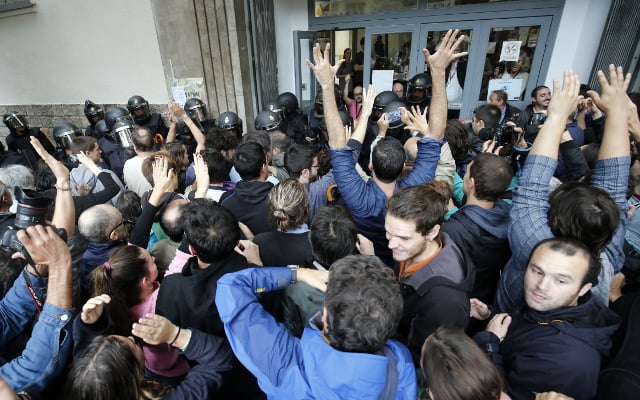 People raising their hands in front of Spanish police officers at a polling station in Barcelona. Photo: Pau Barrena/AFP

They are all fake news.

Misleading news reports, often about violence involving police, and partisan media coverage have fueled tensions as each side seeks to influence the outcome of Spain's toxic political crisis.

One photo of a woman whose fingers were allegedly broken by police to stop her from voting during a banned independence referendum in Catalonia on October 1st was widely distributed on social media.

She later told Catalan television that doctors had only diagnosed swollen cartilage in her hand.

Other widely-circulated reports said that a policeman sent to Catalonia to block the plebiscite had died while on assignment, and that a six-year-old boy had been paralysed by police brutality. All were false.

“We have never seen this in Spain until now,” Clara Jimenez, a journalist in charge of a popular Twitter account called “Maldito Bulo”, or “Damned Hoax”, which verifies stories that circulate online, told AFP.

She said the flood of fake stories started a few days before the referendum, which was marred by police violence.

The bogus reports, shared widely online, form part of the global phenomenon of “fake news”, with Russia in particular being blamed for spreading misinformation in a bid to influence politics.

Catalonia's separatist government went ahead with the October 1st vote even though a judge had ordered police to close polling stations and seize ballot boxes to stop it from happening.

Images of injured voters — real and fake — then circulated around the world.

Many of the people allegedly hurt by police were really pictured from different demonstrations in other places.

Some of the misleading images came from a miners' strike in the northern region of Asturias five years ago, according to an investigation by private TV station La Sexta.

The emotional debate over Catalonia's push to split from Spain, which has deeply divided the country and the region itself, is the “perfect breeding ground for fake news,” said Jimenez.

“People see what they want to see and they believe it. They don't doubt it because feelings are involved.”

The Catalan government said nearly 900 people had received “medical attention” on the day of the referendum.

This figure was translated by some Catalan separatists into “nearly 900 injured.”

Spain's central government rejected that figure, pointing out that two days after the referendum only two people were still in hospital.

“Anyone who was struck was counted as injured,” said Gabriel Colome, political science lecturer at Barcelona's Autonomous University.

“It is obvious that (the separatists) wanted those photos of violence,” he added.

“Since you have won the media battle, you can say it was over 800, no one will question it. It is a post-truth battle, literally.”

AS IT HAPPENED: Clashes at polling stations as Catalonia votes

AFP tried on the day of the referendum to verify the status of the injured.

Catalan health officials would only say that there were 92 “confirmed injuries”, including two seriously injured.

The police crackdown against the referendum has also been covered radically differently by Spanish state television and Catalonia regional TV.

On October 1st TV3, which depends on the Catalan government, opened its main newscast with statements from Spanish government officials hailing the “professionalism” of security forces — followed by images of police beating would-be voters.

On Spanish public television TVE the images of police violence did not make the nightly news.

TVE journalists in Catalonia issued a statement condemning what they called “censorship of the facts”.

Daily El Pais, which is highly critical of Catalan separatists, reported that Russian state-backed news organisations like RT and Sputnik were “using the Catalan crisis as a way to deepen divisions within Europe.”

Asked by AFP about the reports, Spanish Foreign Minister Alfonso Dastis said he did not have “definitive evidence” of “such an interference”.

Ben Nimmo, an information defence fellow at the Atlantic Council, a think tank, said he does not think Russian media had “specific orders by the Kremlin about how to cover Catalonia.”

The Spanish language service of RT was “more balanced” while “Sputnik chose to follow the standing orders to make the west look bad and chaotic”, he said.