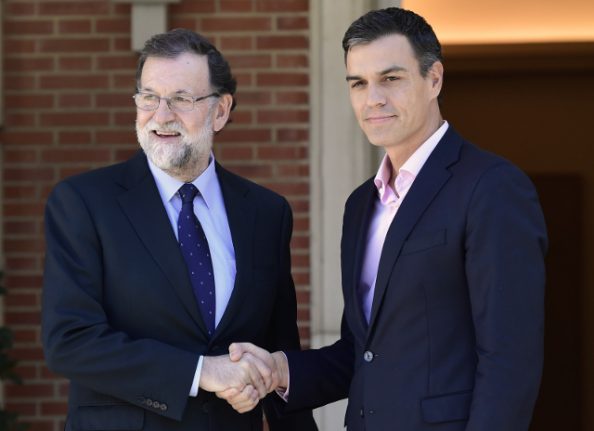 “The agreement which I have with the prime minister is that we open the political road, the road of constitutional reform,” Pedro Sanchez told reporters.

The debate over constitutional reform would focus on “how Catalonia remains in Spain, and not how it leaves,” he added.

Sanchez said a commission would be set up in parliament to study the distribution of powers between the central government and Spain's regions over a period of six months.

This would be followed by a revision of the country's 1978 constitution, with a view to offering a new model of relations between Catalonia and the rest of Spain, he added.

His comments came a day after Catalan president Carles Puigdemont announced that he had accepted the mandate for “Catalonia to become an independent state” following the contested October 1st referendum.

But in a parliamentary speech Puigdemont immediately called for independence to be suspended, to allow for negotiations with Madrid.

Sanchez meanwhile condemned the “absurd ceremony that took place in the Catalan parliament”, as he accused pro-independence leaders of merely “trying to buy time”.

Earlier Wednesday Prime Minister Mariano Rajoy demanded that Puigdemont clarify whether he had actually declared independence, which could trigger moves by Madrid to suspend the region's autonomy.

Sanchez said he backed Rajoy's demand for clarification, saying it was needed to “get out of the swamp” that Puigdemont has thrown Catalonia into.

Catalonia, a region of 7.5 million people that accounts for about one-fifth of Spain's economic output, already enjoys significant powers over matters such as education and healthcare.

But Spain's economic worries, coupled with resentment that the region pays more in taxes than it receives in investments and transfers from Madrid, have helped push the cause of secession from the fringes of Catalan politics to centre stage.