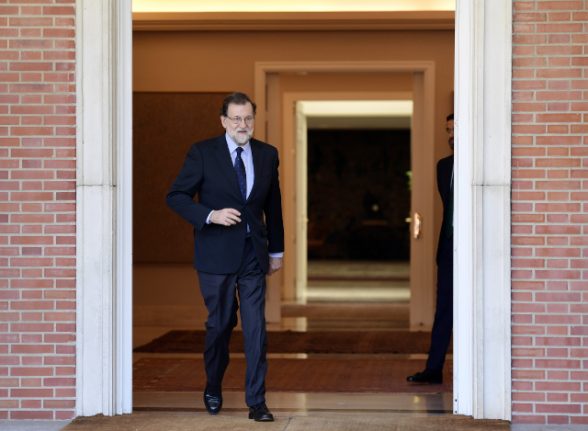 To do that he would need to invoke Article 155 of Spain's constitution — a never-used provision that could open a legal Pandora's box.

What has happened so far?

Thanks to its constitution, adopted in 1978 following decades of civil strife then dictatorial rule, Spain is one of the Western world's most decentralised nations.

It has 17 semi-autonomous regions with varying degrees of control over issues such as education and healthcare.

Catalans voted on October 1 in a referendum outlawed by the courts, which ruled that any vote for self-determination violated the constitution.

Those who voted overwhelmingly backed separating from Spain, though anti-independence voices point to a low turnout and the lack of official electoral standards.

Catalan leaders signed a declaration of independence from Spain on Tuesday but immediately put it on hold and called for talks with Madrid.

What does the law say?

Article 155 says that if a region's government breaches its constitutional obligations or “acts in a way that seriously threatens the general interest of Spain”, Madrid can “take necessary measures to oblige it forcibly to comply or to protect said general interest”.

What are 'necessary measures'?

Article 155 allows for the state — in this case the national government in Madrid — to “take control of political and administrative institutions of the rebel region”, Teresa Freixes at the Autonomous University of Barcelona told AFP.

According to Javier Perez Royo of the University of Seville, measures could include “suspending the regional government, placing the (Catalan police force) Mossos d'Esquadra under the orders of the interior ministry” and even “closing the regional parliament”.

But such measures risk inflaming tensions in a region that, though divided over the issue of secession, is proud of its relative autonomy.

Rajoy could not invoke Article 155 unilaterally, however.

He would need to first inform Catalan leader Carles Puigdemont of his intention, allowing him a period of grace to fall in line.

Next, Rajoy would turn to the Senate, Spain's upper house where his Popular Party has an overall majority.

A committee must back the prime minister's proposal and then the exact legal measures put to a Senate vote.

One senator, who declined to give his name, said the procedure could take a week to complete.

Perez Royo put the timeframe closer to “eight to 10 days”.

But Article 155 is just one of many options Rajoy has to head off Catalonia's separatists.

The government could declare a state of emergency, which would usher in limits on “the freedom of movement and the freedom of gathering”, said Cano Montejano.

And legislation signed in 2015 could allow Madrid to argue that the Catalan crisis amounts to a “situation concerning national security” and take on additional powers.

Rajoy, in a strident interview on Saturday, said Madrid would use every weapon in its legal arsenal to head off the independence movement.