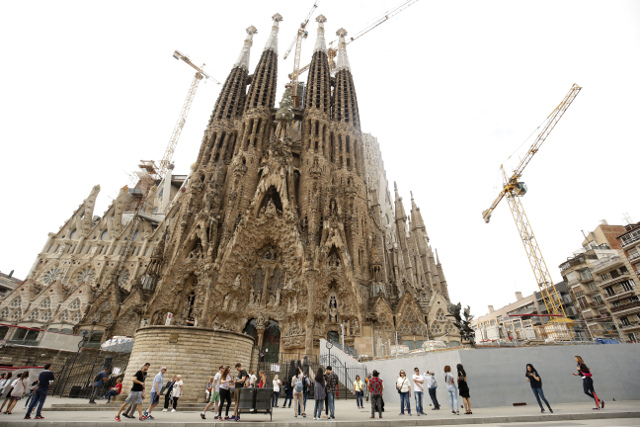 The Sagrada Familia in Barcelona is one of Spain's best-known tourist attractions. Photo: Pau Barrena/AFP

Bordered by the Mediterranean and the Pyrenees, the region, which has its own distinct language and culture, accounts for 6.3 percent of Spain's territory, 16 percent of its population and a fifth of its economic output.

The home of surrealist painter Salvador Dali and architect Antoni Gaudi, its famous Costa Brava, which runs up to the French border, was one of the first stretches of Spanish coast to be developed for mass tourism.

Catalonia is now Spain's most visited region, accounting for 22.5 percent of the country's international visitors.

Over a fourth of the players on Spain's succesful national football team come from Catalonia, which is also the home of Argentina star Lionel Messi's FC Barcelona.

At the same time Catalonia is one of Spain's most indebted regions. Its debt pile stood at 76.7 billion euros ($90 billion) at the end of the first half of 2017, equivalent to 35.4 percent of its gross domestic product.

The region regularly taps into a credit line run by Spain's central government that provides extra cash to regional governments.

But Catalonia complains that it pays billions of euros more in taxes each year to Madrid than it gets back in services such as schools and roads.

The cradle of anarchism in Spain, Catalonia has often had complex ties with the central government in Madrid. General Francisco Franco took away the region's special powers and repressed the use of the Catalan language during his 1939-75 dictatorship.

Catalonia today is one of Spain's most decentralised states. Considered a “historical autonomous region”, it has the power to run its education and healthcare systems.

Conservatives often accuse the regional government of using their powers to limit the use of Spanish and teach the history of the region in a biased way.

Catalonia also has its own regional police force, the Mossos d'Esquadra, which must nevertheless respect instructions from the central government.

The region was long governed by a conservative Catalan nationalist party, Convergence and Union (CiU), which governed the region between 1980 and 2003.

The head of the Catalan government during this time, Jordi Pujol, backed central governments in Madrid of both the right and left in exchange for incremental additions to Catalonia's powers and revenues.

But from 2010 he was tainted by corruption scandals.

Catalonia was headed after 2003 by a left-wing coalition which obtained a new autonomy statute that granted it additional powers and recognised its sense of nationhood.

But Spain's Constitutional Court in 2010 watered down this statute, which, combined with an economic crisis in Spain, sparked a surge in support for Catalan independence.

The nationalist CiU returned to power in 2010 with Artur Mas as head of the Catalan regional government.

A conservative like Pujol, Mas gradually began to embrace the separatist cause and in November 2014 his government staged a symbolic, non-binding independence referendum in Catalonia despite it having been banned by the courts.

The CiU split shortly after due to deep divisions over the independence question.

Pro-separatist Catalan parties from both the left and right then banded together in a coalition called “Junts pel Si”, or “Together for Yes”, for a September 2015 regional election presented as a proxy vote for independence.

In January 2016 a lifelong separatist, Carles Puigdemont, replaced Mas as president and began a push to achieve Catalan independence.