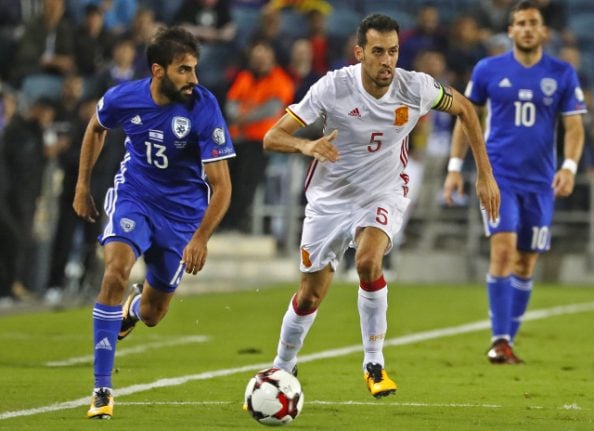 Spain won their final qualifying game against Israel 1-0 in Jerusalem on Monday to finish top of their group, a day after hundreds of thousands of demonstrators rallied in Barcelona against plans by separatist leaders to declare Catalonia independent following a banned secession referendum.

The Catalan regional parliament is expected to meet on Tuesday evening, with the region's president Carles Puigdemont to reveal plans for potential independence following the controversial referendum, which saw violence by authorities against voters.

Three Catalan players are in the current Spain squad, including outspoken defender Gerard Pique, who has backed the referendum.

Any potential independence bid could impact their eligibility.

“We are athletes and politics is very far away. We want to focus on ourselves,” Lopetegui said after the match.

Asier Illarramendi scored the only goal of the match, a spectacular 75th minute volley, ensuring Spain finished the group unbeaten, with nine wins and a draw.

Pique missed the game with suspension.

Spain will be one of the favourites for next year's title, but Lopetegui refused to be drawn on potential rivals for the crown, saying only that all sides that qualified would be strong.

“All teams going to a World Cup are very competitive. It will be a beautiful but difficult competition.”

“We will have to face every match of the World Cup as if it were the last.”

Barcelona midfielder Sergio Busquets, who earned his 100th cap on Monday, said he was “very happy” to reach the milestone, adding that the 2010 World Cup final was “without doubt” his favourite game.

“This qualification has been very hard. Despite this we have had a really good qualification campaign without losing a single game,” added Busquets, who is Catalan.