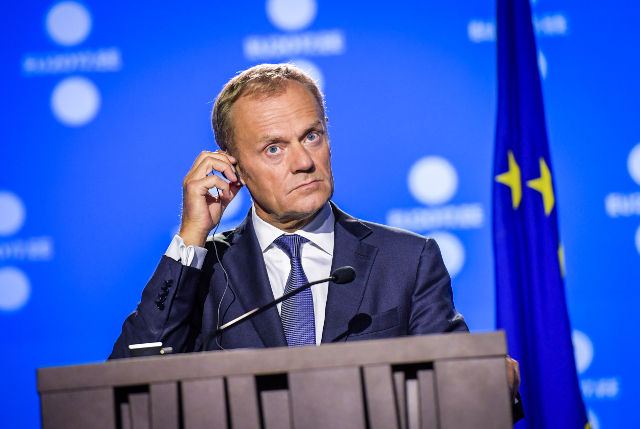 “Today I ask you to respect in your intentions the constitutional order and not to announce a decision that would make such a dialogue impossible,” Tusk said in Brussels, appealing for a negotiated end to a standoff that has sent shockwaves through the bloc.

I appeal to @KRLS not to announce a decision that would make dialogue impossible. Let's always look for what unites us. United in diversity.

Tusk, a self-confessed former football hooligan, said he made his appeal in a spirit of European unity and also “as a man who knows what it feels like to be hit by a police baton”.

“Diversity should not, and need not, lead to conflict, whose consequences would obviously be bad: for the Catalans, for Spain and for the whole of Europe. Let us always look for what unites us, and not for what divides us,” Tusk said.

French president Emmanuel Macron also weighed in on the situation on Tuesday, saying he was confident the Catalonia crisis will be resolved peacefully, as Spain waited to see whether the region's leader will declare independence.

“There is a grab for power by the Catalans. I hope it can be handled peacefully, I think that will be the case,” Macron told a panel discussion at the Frankfurt Book Fair. “I am confident of this.”

Macron said the independence push breached the Spanish rule of law and that the separatists were motivated in part by an “economic selfishness that frightens me”.

“I do not have the feeling that it (Catalonia) is oppressed,” he said.

The French leader also insisted that it was not up to the European Union to intervene, saying “this is not the role of Europe” as it would put both sides “on an equal footing”.

Whether or not Catalan president Carles Puigdemont will follow through on his threat to announce a full breakaway – defying the central government and Spanish courts – is still a mystery.

Puigdemont may tell Catalan lawmakers in an extraordinary parliamentary session beginning at 18.00 Spanish time, where he is expected to reveal his next move.

ANALYSIS: This is what could happen if Catalonia declares independence