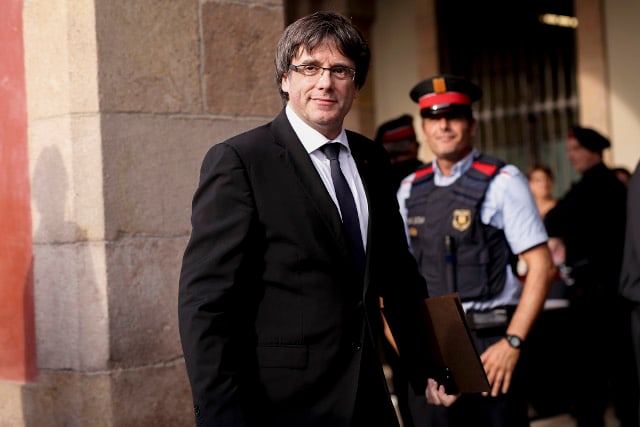 In a speech to regional lawmakers at an extraordinary parliamentary session delayed by more than an hour in Barcelona, Puigdemont said he “assumed the mandate of the people for Catalunya to be an independent state in the form of a republic”.

But he then immediately added:

“I ask the parliament to suspend the independence declaration so that we can enter into dialogue in the coming weeks”.

“Mediatory measures have been launched. All (of them) are very serious, difficult to imagine some time ago. Some at national level, other at state and global level,” he continued.

“There is a desire for dialogue that runs through Europe. I ask the Spanish government to listen, and for the European Union to get involved. If everyone fulfils their obligations, in the coming days the conflict can be resolved without betraying the will of the people.”

“It's unacceptable to make a tacit declaration of independence to then suspend it in an explicit manner,” a central government spokesman told AFP.

Legal experts on international law and Spanish constitutional law told The Local earlier on Tuesday that a 'deferred' declaration of independence is a way of buying time and encouraging international mediation.

“It is a way of not renouncing your objective while creating waiting time, within the margin of which you can negotiate on different fronts to either make independence effective from a certain time, or submit to a legally guaranteed referendum,” Joan Vintró, lawyer and lecturer on constitutional law at the University of Barcelona said.

“It’s not legally advantageous, but politically it is. In the Catalan case it has some practical inconveniences because the Spanish government will presumably not respond with genuine negotiation,” Josep Costa, associate professor in political theory at Barcelona’s Pompeu Fabra University and a licensed lawyer argued.