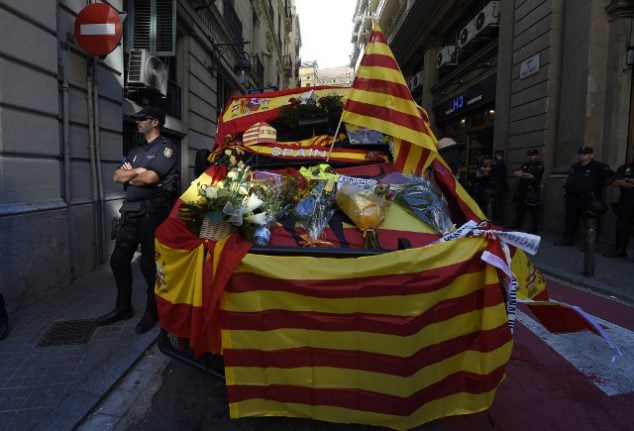 Catalan and Spanish flags at a demonstration against Catalan independence in Barcelona. Photo: Lluis Gene/AFP

After several days of rising tensions, thousands of Catalans line up to vote in the referendum, despite it being declared illegal by the Spanish courts and the central government.

AS IT HAPPENED: Violence at polling stations as Catalonia holds referendum

Catalan leader Carles Puigdemont says “the citizens of Catalonia have won the right to an independent state in the form of a republic”.

But Prime Minister Mariano Rajoy insists: “There has not been a self-determination referendum in Catalonia. The rule of law remains in force with all its strength.”

The Catalan government claims 90 percent of voters backed independence and a turnout of 42.3 percent, with parties opposed boycotting the vote.

The European Commission calls on Madrid and the separatists to hold a dialogue, while the United Nations urges Spain to investigate the violence.

Puigdemont demands the withdrawal of national police from Catalonia and calls for international mediation.

Several thousand people march in Barcelona and other Catalan towns to defend the referendum and denounce police violence.

A general strike called by more than 40 unions, political and social groups, disrupts Barcelona's port, transport and some businesses. Up to 700,000 people demonstrate in the Catalan capital.

October 4: Towards an independence declaration?

Puigdemont says his government is preparing to proclaim independence, perhaps at “the end of the week”.

A source in the Catalan government tells AFP the declaration could be made on October 9th during a regional parliamentary session.

Banco Sabadell, Catalonia's second largest bank, announces it will relocate its offices outside the region. Several other companies follow suit.

Puigdemont delays an appearance in the regional parliament until Tuesday.

Madrid's Catalan representative apologises for the first time for the police violence during the vote.

In Madrid, pro-independence leaders are released after facing court on sedition accusations.

Tens of thousands of people, some dressed in white, demonstrate in several Spanish cities, as well as the Basque Country, demanding dialogue to resolve the crisis.

In a newspaper interview, Rajoy refuses to rule out suspending Catalonia's regional autonomy unless its leaders withdraw the threatened independence declaration.

Puigdemont hints that the region would declare independence if Madrid continues to refuse dialogue.

“The days are going by and if the Spanish state does not give a positive response, we will do what we set out to do,” he tells Catalan television.