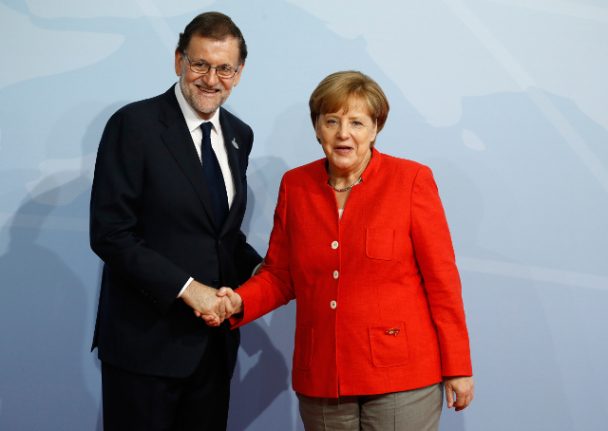 In the weekend phone call, Merkel “affirmed her backing for the unity of Spain, and both sides exchanged views on ways in which internal Spanish dialogue can be boosted within the framework of the constitution,” said spokesman Steffen Seibert.

Spain lurched into its worst political crisis in decades after Catalonia held a vote on independence on October 1 in defiance of the Spanish government and courts.

A violent crackdown by police seeking to thwart the vote in the region sparked an international outcry.

Seibert last week declined comment on the police violence that left hundreds of people injured, saying it was “not my task to assess police operations in Spain”.

He also said then that Merkel was not seeking to mediate between parties in the Spanish dispute.

Rajoy has issued a stern warning to Catalan leaders who have said they could declare independence this week.

He did not rule out moving to stop that by suspending Catalonia's regional autonomy, at the risk of sparking unrest.

READ ALSO: Rajoy will not rule out suspending Catalonia's autonomy

Pressure has mounted on Catalan president Carles Puigdemont to back down after hundreds of thousands of protesters last week rallied to defend national unity.

“If there were a declaration of independence it would be unilateral and it wouldn't be recognised,” Nathalie Loiseau said on CNews digital news channel.

“This crisis needs to be resolved through dialogue at all levels of Spanish politics,” she urged.

The minister also reiterated Brussels' warning that an independent Catalonia would “automatically” be out of the EU and have to reapply to join.

“We are allies and partners with Spain, and Spain is a major democracy, so we are not going to meddle in the internal affairs of Spain.”

She said Catalonia, which borders France, already has “considerable autonomy”.