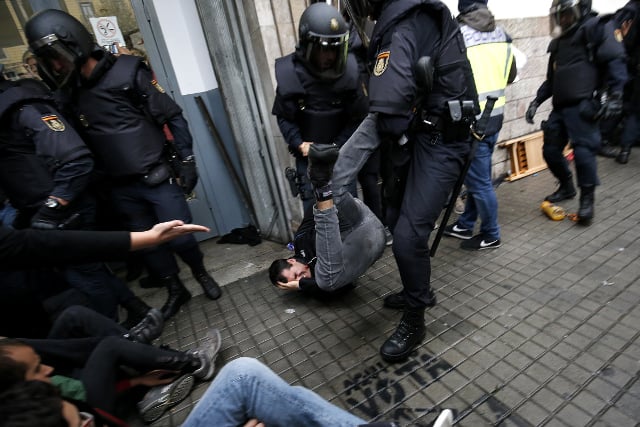 Spanish police officers drag a man as they try to disperse voters arriving to a polling station in Barcelona, on October 1st. Photo: Pau Barrena/AFP

In a letter sent to Spain's Minister of the Interior Juan Ignacio Zoido on October 4th and published on October 9th, Commissioner Nils Muiznieks noted his “concerns regarding allegations of disproportionate use of force by law enforcement authorities in Catalonia” on the day of the plebiscite, deemed unconstitutional by Spain's courts.

Muiznieks received reports of “disproportionate use of force against peaceful demonstrators and persons engaged in passive resistance to police action” both on the streets and at places where they intended to vote.

“I understand that law enforcement officials have made use of anti-riot weapons, including rubber-bullets. Non-governmental organizations monitoring the situation in Catalonia including Amnesty International have reported cases of improper use of rubber bullets, allegedly resulting in injuries in some cases,” the official continued, pointing out that he had previously stressed on a visit to Spain in 2013 that using such weapons presents a “clear danger” for the safety of demonstrators “as evidenced by past fatal occurrences”.

See my exchange of letters with Min of Interior of #Spain on police conduct in #Catalonia on 1 October https://t.co/9wtIi9ZSiu

Muiznieks acknowledged that it is difficult for police officers to do their work due to the tense context in Catalonia but added that it is “of the utmost importance” to ensure they receive instructions on exercising restraint and the proportionate use of force.

“I urge you to ensure, in co-operation with other authorities in charge of law enforcement, that swift, independent and effective investigations are carried out into all allegations of police misconduct and disproportionate use of force during the events of 1 October 2017 in Catalonia,” the letter concluded, arguing that such investigations would be important both in preserving public confidence in law enforcement and also to prevent tensions from escalating further as well as deterring any “further police misconduct”.

A written response from Minister of the Interior Zoido dated October 6th has also been published, in which he stressed that “in Spain no one is persecuted for their ideas” and “any political aspiration can be expressed and directed through the legal means”. Spain’s Constitutional Court deemed the Catalan referendum illegal, the minister pointed out, which led to security forces acting to prevent actions that “could have contributed to the organization and progress of this referendum”.

Forces “acted prudently, appropriately and proportionately with the objective of ensuring compliance with the law and the protection of rights and liberties of all citizens,” Zoido insisted.

“Action was not directed against citizens and their ideas, but rather sought to ensure the consultation was not carried out, thus carrying out instructions from the highest courts to the last of the courts in the country.”

No democracy could “accept the a defiance of its constitutional order and territorial integrity that seeks to impose breakaway project by force,” he concluded.

On the same day Zoido's letter was written, the Spanish government’s representative in Catalonia offered the first apology to Catalans injured by police during the independence vote.

“I can do nothing but regret it, apologise on behalf of the officers who intervened. I am very sad, very sorry, we deeply regret that we have arrived at this situation, it has been very hard, everything that we have experienced and seen these past few days,” Enric Millo said.

Catalan leader Carles Puigdemont is set to address the region's parliament on Tuesday evening, where he could declare independence in defiance of Spanish authorities. Spain's Prime Minister Mariano Rajoy has refused to rule out suspending Catalonia's regional autonomy, meanwhile.

READ ALSO: What happens next in Catalonia?