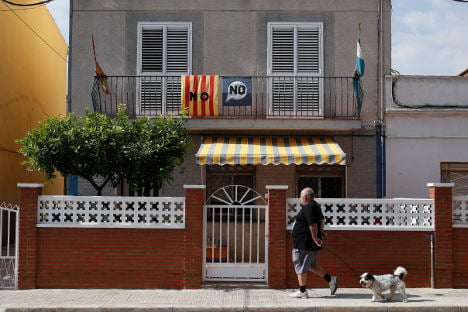 Catalan leaders had threatened to declare independence unilaterally and Spanish Prime Minister Mariano Rajoy vowed to stop them, rejecting calls for mediation in a dispute that has drawn cries of concern even from Barcelona and Real Madrid footballers.

Spain's deepest political crisis in decades has raised fears of further unrest in the northeastern region, a tourist-friendly area of 7.5 million people that accounts for a fifth of Spain's economy.

Opponents of secession have called for demonstrations around Spain and a major rally in Barcelona on Saturday.

Also Saturday, people who support dialogue to end the crisis plan to gather in a bid to pressure mayors nationwide. The anonymous initiative, which spread across social media, seeks to promote talks using the slogan: “Spain is better than its leaders”.

“It's the moment to come together to tell (our leaders) that they are incapable and irresponsible,” the group's manifesto reads. The gathering will start from around midday (1000 GMT).

A “patriotic” march will start around the same time in central Madrid, organised by people who support a united Spain.

Friday saw the first signs the sides may be willing to step back from the brink in a political conflict that risks destabilising Europe.

After days of ill-tempered rhetoric, the central government said it regretted the injuries and suggested Catalonia should hold a regional election to settle the crisis.

Catalan government minister Santi Vila, a close of ally of regional president Carles Puigdemont, meanwhile told broadcaster Rac1 that his side could consider a “ceasefire” in the dispute, to avoid a further crackdown by Madrid.

Businesses and the government kept up economic pressure on Catalonia however, with several big companies announcing moves to shift their legal domiciles to other parts of Spain.