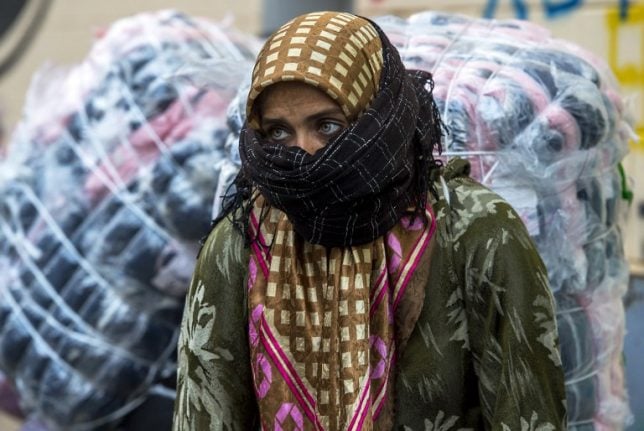 Nicknamed “mule women” on the Spanish side of the frontier, the Moroccan women sometimes struggle under burdens heavier than their own body weight, risking their lives for the job.

So far this year four porters have been trampled to death in crushes, and activists in both Morocco and Spain have repeatedly complained the work is “humiliating and degrading”.

In the small hours of a recent night, the women gathered in an orderly queue by a border crossing for pedestrians on a hill overlooking the Mediterranean between the Moroccan town of Fnideq and the Spanish port of Ceuta, where goods are duty free.

After checks at the frontier they enter the tiny 18-square-kilometre (7-square-mile) strip of Spain, which along with Madrid's other enclave of Melilla are the only land borders between the European Union and Africa.

“This is the first time that I am doing this work!” exhaled 30-year-old Fatima, wearing a red robe and grey headscarf.

The next stop is a commercial zone, built in 2004 near the customs to avoid the thousands of Moroccan traders who arrive daily to replenish their stocks from heading into the city centre.

There, immense hangars are piled high with all sorts of goods: clothes made in China, household items, food. While the prices are marked in euros, everyone pays in Moroccan dirhams. At the entrance to each warehouse, dozens of female porters await instructions. They are not there to barter or to buy, but only to transport the goods.

They fill up rectangular bags that are then strapped on with ropes, and pick up a ticket with the amount of money they will receive once they make the delivery.

“The rope is hurting me,” Fatima complained, her back bent under the load.

Fatima and the other porters then set off on the return journey to Fnideq, where the authorities do not impose tax on goods brought in if they are transported on foot rather than by vehicle through the official border post.

Once there the women claim their fees — usually some several dozen euros depending on the weight and nature of their goods. It is estimated that some 15,000 female porters tread the route from Ceuta to Morocco, even if the daily number is lower after the Spanish authorities established a limit of 4,000 people each day.

While officials have turned a blind eye to the system, rights activists insist that the porters are being exploited by powerful interests.

“What we are trying to show is that these women are victims of an organised smuggling racket that serves the interests of some people who have privileged ties to local authorities,” explained Mohamed Benaissa, the president of the Northern Observatory for Human Rights.

“These lobbies are made up of smugglers from Ceuta who bribe customs officials to let the goods pass and those in Fnideq who then stash it in garages before redistributing it” without paying taxes, he said.

Due to an agreement between Morocco and Spain, Moroccans who live in four towns close to the border don't need a visa to cross into Ceuta.

However, some 65 percent of women who work as porters do not come from areas along the frontier, Benaissa said, meaning that they have to pay bribes to be registered as locals.

While Moroccan officials have repeatedly claimed that they will step in to rectify the situation, activists say that too often they themselves were involved.

“In the past the authorities have actually sanctioned some officials to carry on these practises,” Benaissa said.