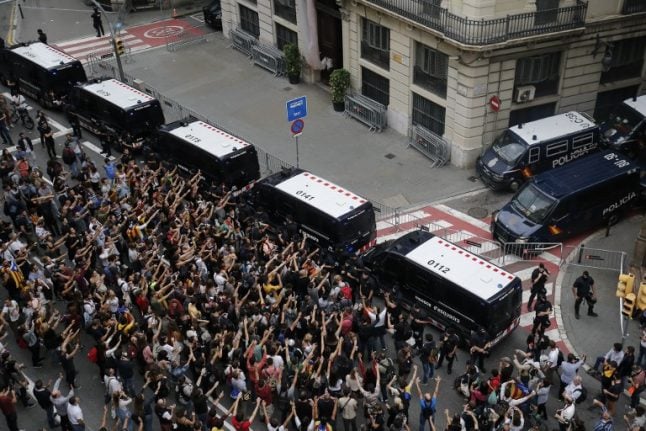 Protesters shout slogans during a demonstration outside the Spanish national police headquarters in Barcelona on Monday. Photo: AFP

Close to 200 Spanish special forces and riot police sent to Catalonia to stop an independence referendum were evicted from the hotel where they were staying on Monday, their union said, amid anger over police violence during the banned vote.

The AUGC union for the Guardia Civil police force said people angry over Sunday's violence stood outide Hotel Vila in Calella until the early hours of the morning.

“After a long day of work, the Guardia Civil had to endure shouting, insults and some bottles were thrown,” the union said in a statement.

It added that on Monday morning, management at the hotel told the close to 200 agents there that they would have to leave.

Further protests occured during the night on Monday when crowds of people noisly demonstrated outside hotels known to be lodging groups of Civil Guard and National police officers.

Catalans are furious over police violence that marred the referendum which regional separatist leaders organised despite strict orders from Madrid not to do so.

Riot police moved in on polling stations in towns and cities across the region to stop people from voting in a referendum deemed unconstitutional by the Spanish courts, in some cases baton-charging and firing rubber bullets to disperse crowds.

Authorities said nearly 900 people had sought medical attention after clashing with police on Sunday. Four people were hospitalised, two in serious condition — a 70-year-old man had a heart attack and another man was hurt in his eye.

President @KRLS: “There are 893 people injured, 4 have been hospitalised and 2 are in very serious condition”

In Barcelona and Reus, protesters also rallied in front of national police headquarters on Monday.

The AUGC union said the police agents evicted from their hotel “were waiting to find other accommodation.”

“We are watching with increasing concern this climate of hostility towards Guardia Civil, a situation that has sky-rocketed in just a few days,” it said.