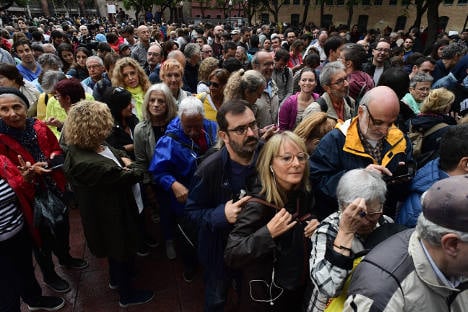 In Barcelona, as well as Girona, the bastion of Catalan president Carles Puigdemont, people said they had turned out before dawn to protect polling stations and defend their right to vote, defying attempts by the central government to prevent the ballot from taking place.

Spain's central government is staunchly against the vote, which has been ruled unconstitutional by the courts, and has used all the legal tools at its disposal to stop it from taking place.

On orders of judges and prosecutors, police have seized ballot papers, detained key organisers and shut down websites promoting the vote.

But on the streets early Sunday, voters were determined to be heard.

“In Catalonia, we are at the stage where we think that it's essential to decide if we want to remain part of the Spanish state,” Pau Valls, an 18-year-old student told AFP.

In an interview with AFP on Saturday, Puigdemont insisted that his government had “everything in place” so that the referendum could go ahead in the wealthy region that is home to some 7.5 million people.

The planned referendum has sown divisions among Catalans and stoked passions further afield in Spain.

Opinion polls show the region is deeply divided over independence, but a large majority of Catalans want to be able to settle the matter in a referendum, though most would prefer it to be legal and binding.

Whatever happens, Sunday's referendum result will not be recognised by Madrid, and almost certainly not by the international community.

But separatist leaders are banking on a high turnout to give legitimacy to their vote, though it is as yet unclear how people will be able to cast their ballots.

Spain's interior ministry said Saturday police had closed most of the 2,315 polling stations across Catalonia.

But at least 160 were occupied by teachers, parents, students and activists determined to let people in anyway.

All eyes were on whether police would forcefully evict them.

Some schools designated as polling stations imagined innovative ways to stay open, organising leisure activities all over the weekend, from kids' pyjama parties to volleyball games.

A regional government source said voting may also take place in other places like health centres and even retirement homes.

Farmers and firefighters have also pledged to protect polling stations.

She said Catalan police had already told those inside that they would come and notify them that they had to shut the school down.

“But they have also told us that if there are people inside, they won't be able to do it so we just need to make sure that this remains open.”

The Mossos d'Esquadra Catalan police have warned about the risk of “disruption of public order” if efforts are made to prevent people from casting ballots.

Madrid has sent thousands of extra police officers from other forces to Catalonia to stop the referendum from happening.

On Saturday, Puigdemont called on those going to vote to maintain a “peaceful attitude”.

That same day, thousands took to the streets across the country – including in Barcelona – in favour of national unity.

As well as being critical of Puigdemont, some protesters also faulted Prime Minister Mariano Rajoy's conservative government for limiting its response to the crisis to repeating that the referendum is unconstitutional.

“The state needs to explain the benefits of remaining united, instead of repeating all the time that the referendum is illegal,” said Rafael Castillo, a 59-year-old engineer at a Madrid rally, wearing a scarf with the Spanish flag around his neck.

Whatever happens on Sunday, analysts fear that the standoff between Catalan leaders and Madrid has left a damaging mark.

And it is unlikely to blow over after the vote.

Carles Riera, a regional parliament lawmaker for the radical CUP party, part of Catalonia's separatist coalition, vowed that mobilisation would continue after the vote – if the “yes” camp won but Madrid opposed the result, as is almost certain.

“We're in a process of popular mobilisation that is going to last a while,” he told reporters.